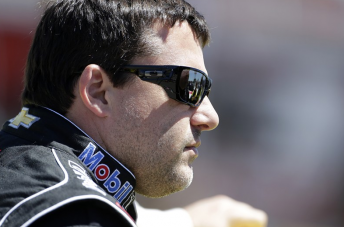 NASCAR Sprint Cup star Tony Stewart has been taken to hospital with a suspected broken leg after a high speed Sprintcar crash in Iowa.

The 42-year-old had been competing in the Front Row Challenge at Iowa Speedway in Oskaloosa, Iowa, for his own Tony Stewart Racing outfit.

Initially he was taken to the Mahaska Health Partnership (MHP) Hospital in the small town of Oskaloosa before being helicoptered to another facility for treatment.

The latest pr0gnosis on Stewart revealed he had broken his right tibia and fibula and has undergone surgery according to a statement from Stewart-Haas Racing.

He had started deep in the pack and charged his way through to the lead of the race.

Stewart, the first car on the scene, was left with nowhere to go and plowed into Higday’s machine (pictured).

Numerous other cars were involved in the pile-up.

It took paramedics around 10 minutes to extricate Stewart from the car, at which point he was conscious and complaining of leg pain. While the final diagnosis is still being determined, reports from the ground suggest he has sustained a compound fracture in his leg.

An Australian spectator contacted Speedcafe.com with an eyewitness report: 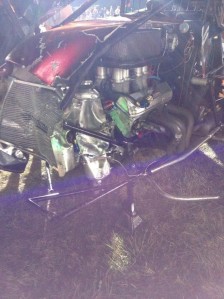 “Tony was incredibly hooked up and was absolutely flying at the time, he came around and just had nowhere to go,” the spectator told Speedcafe.com.

“It was just one of those deals that happen in Sprintcar racing. The lapped car had spun and Tony ploughed into him.

“Once that happened another three or four were involved, they had nowhere to go either.

“Oskaloosa is just one super fast racetrack and it is unfortunate this happened to Tony.”

The traditional warm-up event for the Knoxville Nationals later this week is considered to be a major party race and is promoted by fellow racer, Terry McCarl.

Stewart has increased his dirt track racing commitments throughout season 2013 and has already been involved in a number of high profile crashes.

Stewart sits 11th in the Sprint Cup standings with just five races left until the Chase cut-off, which sees the top 10 in points, plus two ‘wildcards’, left to fight it out for the title.