Nissan Motorsport’s Todd Kelly has hit back at critics of his own driving in recent races by calling for a crackdown on those who fail to give racing room.

The former Bathurst 1000 winner believes that the overall standard of driving sunk to a new low last time out at Queensland Raceway, where he was repeatedly pushed off the track while attempting to run side-by-side with other cars.

Kelly has been involved in a spate of incidents across the Hidden Valley, Townsville and Ipswich events and says the majority would have been avoided if his rivals had simply given room.

“Everyone needs to have a good think about what actually causes these things,” Kelly told Speedcafe.com.

“Every race in Queensland at least two or three times when I was side-by-side with blokes they’d just run me straight off the track, and in some cases all four wheels clean off on the exit.

“In every drivers’ briefing that we’ve been in that’s been discussed and nothing gets done about it. People just keep doing it. It bloody annoys me and there’s just been too much of it happening. 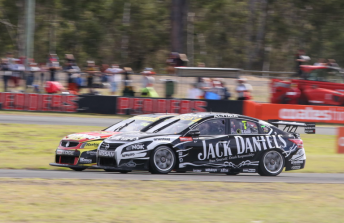 “What actually annoys me most is that we’re the most vulnerable cars out there and should be the easiest to pass,” he added, referring to Nissan’s continued struggle for straightline speed against its Ford, Holden and Mercedes rivals.

“For a half decent driver, our cars are that slow up the straight that they should be able to tuck in behind us and pass us under brakes.

“The fact that they’re still nerfing us off the track is bloody ridiculous. They couldn’t have an easier car to pass than what we’ve got at the moment.”

Competing full-time in V8 Supercars since 2000, the now 33-year-old Kelly has not won a race since starting his own team alongside brother Rick four years ago.

Despite staring down the barrel of a fifth consecutive year of finishing in the bottom half of the points standings, Kelly says he’s keen to race on in 2014.

“I certainly want to keep driving next year,” he said.

“The only reason I’d stop is if I wasn’t fast enough anymore or we were in a position where we needed to take someone with funding.

“We’re not in that position (of needing a funded driver) and you can see from the results that I’m not struggling for speed against the other guys (team-mates).”

Kelly has been beaten in qualifying by all three of his Nissan team-mates – Rick Kelly, Michael Caruso and James Moffat – on just eight occasions across the first 24 races of the year.

Seven times, including twice across the three-race Queensland meeting, he has been the top-qualifying Altima driver.