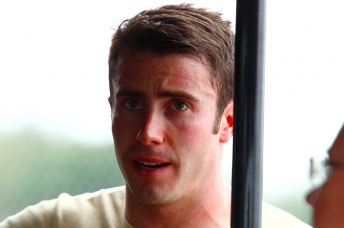 James Davison is content that he did all he could to impress the IndyCar Series paddock during his one-off IndyCar drive with Dale Coyne Racing at Mid-Ohio.

Competing in his first open-wheel race since finishing second in the 2010 Indy Lights Series, the 26-year-old Australian chalked up an impressive 15th place result, taking the flag on the lead lap.

Davison had earlier qualified 17th in the 24 car field despite a small tangle with Indianapolis 500 pole-sitter Ed Carpenter early in the session.

“To finish inside the top 15 on debut was gratifying for sure,” Davison told Speedcafe.com.

“I had to learn everything from the ground up over the weekend, especially in the race.

“I was fine physically which was a little surprising as the race went green for the entire 90 laps. 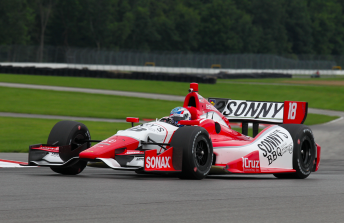 Davison behind the wheel at Mid-Ohio

“Overall I’m pleased. It was great to match (James) Hinchcliffe and (Helio) Castroneves in my qualifying group and be within half a second of (Dario) Franchitti setting the pace.”

Davison was the fourth driver to step into the #18 DCR Dallara-Honda this year after Ana Beatriz, Mike Conway and Pippa Mann all sharing the car across the first 13 races.

Conway is scheduled to return to the seat at Houston in October. Mann will do likewise for the season finale at Fontana, while Stefan Wilson – the younger brother of existing team driver Justin – is set to make his IndyCar debut in the car next month at Baltimore.

Although that leaves one unaccounted for race at Sonoma later this month, Davison confirmed that he won’t be taking the slot.

“As it stands it was a one race deal with Dale as he is committed to other drivers for the remainder of the season,” he said.

“I’ve done all that I can now so it comes down to catching a bit of a break.”

Davison’s Mid-Ohio ride was funded with the help of a variety of gentleman drivers that he had previously encountered while drifting between one-off sportscar races and other driver coaching duties in recent years.

He’ll be back at the wheel of a Grand-Am GT car at Road America this Friday, completing practice duties for Borris Said’s Corvette team.