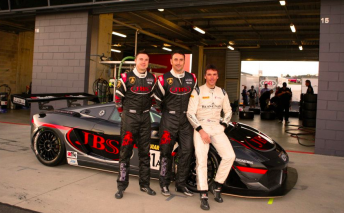 Australian GT campaigner Roger Lago has high hopes for his team’s first foray into international competition at the Sepang 12 Hour later this month.

The car has been fully repaired since its most recent race appearance at the Bathurst 12 Hour in February, where the trio’s efforts were cut short by an early crash, and is now in full 2013 FIA GT3 specification.

Lago had planned to contest the Sepang race in 2012 before an accident at a preceding AGTC event curtailed his assault.

The two-time GT3 Cup Challenge winner added a second Gallardo to his stable this year, allowing one car to be dedicated to endurance events.

“There’ll be some good competition, but with Dave and Peter we’ve got two of the best co-drivers. I’ve just got to hold up my end of the bargain.

“We’re not there to just circulate, we want to finish on the podium at the very least,” he added.

“But so many things can happen in a 12 Hour race. You can’t take anything for granted.”

The Australian team’s competition for the race will include a two-car entry from two-time reigning winners Petronas Mercedes, as well as single cars from the likes of AF Corse (Ferrari), Clearwater Racing (Ferrari), Craft Racing AMR (Aston Martin) and Nismo (Nissan).

Australian Carrera Cup points leader Craig Baird will lead the Clearwater assault, which is without its regular Bathurst pilot Matt Griffin due to the Sepang rules only allowing one ‘pro’ driver in each car.

After some contention, Russell has escaped a pro seeding, leaving Lago to rate the former Dunlop Series and Carrera Cup front-runner as one of his squad’s greatest assets.

The Australian campaign will be further boosted by the assistance of three Reiter Engineering crew members from Germany.

Following Sepang, Lago has his eye on branching further affield with his endurance efforts.

“We’ll tick the Sepang box and then maybe look at the Dubai 24 Hour,” he said.

“Spa (24 Hours) would be a cracker but it’s an awfully long way to go and we’ve got to focus on doing things a step at a time.”

Lago confirmed that he already has Kox and Russell locked in for next year’s Bathurst 12 Hour.

Kox will be given the duty of starting the race after twice travelling to the event only to see his car crashed before he was able to turn a racing lap.