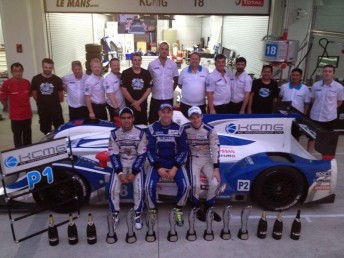 The reigning Australian Formula 3 champion, who only agreed a deal to compete for the Hong Kong team this week, helped steer the squad through a monsoon to secure a three-lap victory from the AF Corse Ferrari 458 driven by Australian Steve Wyatt.

Winslow told Speedcafe: “It’s great to be driving in sportscars and learning LMP2 machinery in preparation for the Le Mans 24 hour next year.

“Winning our first race is amazing KCMG first victory and an exciting event, after only one session in the car and straight into the race, and to lead and stand on the top step of the podium is fantastic.”

The heavens opened just minutes before the start of the three hour endurance prompting officials to start the race under the safety car.

Winslow, who was chosen to complete the opening stint, coped well with the conditions and after eight laps the safety pulled into the pits.

Winslow and the KCMG team enjoyed a great dice with LMP2 rivals and pole sitters OAK Racing who had former F1 test driver Ho-Pin Tung at the wheel.

With an hour of the race completed, a dry line began to appear which suited the KCMG Morgan Nissan and from lap 39 KCMG forged into the lead and went on to take the chequered flag.

However, the ex-Sauber star was unable to hold on to the position at the flag as Wyatt’s AF Corse 458 followed KCMG home.

OAK Racing secured the final podium spot in third with Kobayashi’s 458 crossing the finish line two laps behind in fourth.

Winslow is expected to join up with the KCMG team for the second round of the Asian Le Mans Series at Japan’s Fuji Speedway on September 22.