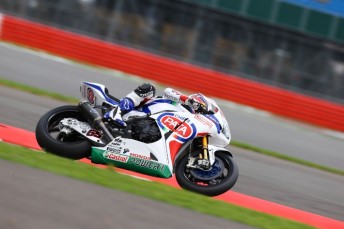 Northern Irishman Jonathan Rea held his nerve in damp conditions to record his first victory of the World Superbike Championship season at Silverstone.

The Pata Honda man made the most of a strong start from the front row and while his rivals faltered as rain fell on the Northamptonshire circuit, he kept his cool to claim a comfortable win.

Poleman Eugene Laverty endured a topsy turvy ride but he managed to come home in second despite dropping to eighth during the race. Fixi Suzuki’s Leon Camier produced his best performance of the season to secure third.

Championship leader Sylvain Guintoli salvaged fourth which extended his advantage over Tom Sykes who could only finish in a lowly 11th spot.

Laverty and Rea blasted of the line with the Aprilia leading into the first complex. Loris Baz followed while Camier dropped to 10th from seventh on the grid. The Kawasaki’s were strong from the off and Sykes moved past team mate Baz and then Rea before grabbing the lead on lap four.

But the race order was to be turned upside down as more rain fell on the circuit. Sykes began to slide down the order with his bike struggling for grip.This gave Rea the lead from

Baz with Guintoli in third as Laverty also slipped down the order.

Rea and Baz began to break away from the field while the battle for third intensified. Jules Cluzel, a resurgent Leon Haslam, Guintoli and Camier had all held the position within a matter of the laps as places changed from corner to corner.

Th rain may have affected the majority of the field but it didn’t disrupt Rea as he took the win. Baz faded in the latter stages and it seemed Camier would come home in second but for a last gasp effort from Laverty. The polesitter, who had dropped to eighth, fought back in the dying laps to pass Camier on the final lap for second spot.