Kahne bowls them over at Pocono

Kahne bowls them over at Pocono 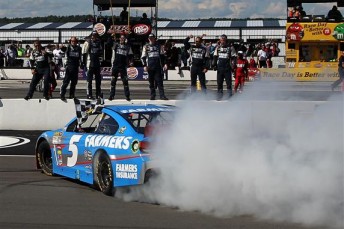 The 16th win of his career has all but guaranteed him a spot in the Chase for the NASCAR Sprint Cup after he won a late race re-start battle with Gordon.

Kahne made the winning pass to the outside of Gordon through Turn 1 and cleared his teammate near the entry to the Tunnel Turn at the 2.5-mile triangular track.

“On that final restart, I spun my tyres a little bit and he (Gordon) got a great jump, and Kurt (Busch) pushed me all the way to Turn 1, which really helped,” said Kahne.

“I had one opportunity to either go for it and make it work or not. As good as our (car) was all day long, I thought we could make that work on the outside.

“I just needed to clear him, and when we got to Turn 2, I was able to do that. It was a great race. We had a really fast car. (Crew chief) Kenny (Francis) called an awesome race, and the whole pit crew did a perfect job… We needed this one to get in the Chase — we were able to get it, and it feels really good.”

Gordon was the epitome of mixed emotions after the race. The second-place finish elevated him to ninth in the standings, but Gordon is still winless this season and therefore in danger of missing the postseason if he has serious trouble in any of the five races remaining before the Chase field is set at Richmond.

Pole man Jimmie Johnson had a fast car and dominated the first half of the race, but the championship leader blew a right front tyre on Lap 76 and found the fence. He would go on to finish 13th just one place behind Australia’s Marcos Ambrose.

VIDEO: Final run to the flag