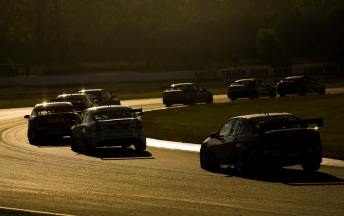 V8 Supercars is determined to shake-up its race weekend formats next season as it refines its racing product ahead of the next media rights deal.

The word ‘innovation’ has emerged as a key catch-cry to the reign of recently appointed CEO James Warburton, who has already targeted the introduction of night races as a major opportunity for the sport.

The success of any revised formats next year will have a significant impact on the television deal that will replace the much lamented two-year stop-gap that wasn’t signed off until mid-January this year.

The cut-price deal was a jolting reminder of V8 Supercars’ position in the television market relative to the AFL, NRL and international cricket, leaving the championship to focus on improving its product.

Discussions over twilight and night racing are said to have already begun with the Seven Network.

“What I want to do is to drive as much innovation as I can for this year and for next year in terms of time zones and what we can and can’t do,” he told Speedcafe.com

“We’ve been discussing it with our media partners the whole notion of our sport and the value of it.”

Flexibility to accommodate night racing in Australia appears to have been boosted with the rise of digital multi-channeling.

The placement of V8 Supercars away from Seven’s main channel has to date been seen as a negative due to the lower viewing numbers that have proven inherent as the population adjusts to the new free-to-air landscape.

While the Shannons Nationals has run two events into the night this year, including last weekend at Queensland Raceway, V8 Supercars have not run under lights in Australia since the opening events of the 1996 and 1997 seasons at Sydney Motorsport Park (then Eastern Creek) and Calder Park respectively.

“Whilst it may have been a disadvantage in the past it could actually be very advantageous to us,” said Warburton of utilising the multi-channel off-shoots in prime time.

“There’s no doubt that when you go back to Eastern Creek you can see how spectacular it (night racing) is. I’m determined to make it happen.”

Despite scheduled two-day events at Queensland Raceway and Phillip Island both being extended back to three days following the initial 2013 calendar announcement, more compact meetings are still on the agenda.

Fridays are generally run at a loss for promoters, while teams remain frustrated with a lack of quality running due to the increasingly limited tyre stocks.

“It all comes back to the quality of rounds and the capability of those events. Ultimately the cost savings are needed at unprofitable events,” he said.