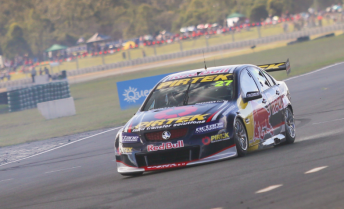 Red Bull Racing Australia team manager Adrian Burgess believes that Casey Stoner will need to return for a second season of Dunlop Series competition if he is to continue his V8 Supercars career in 2014.

Stoner broke through for his first top 10 finish in Round 4 of the season at RBRA’s test track, Queensland Raceway, late last month, ending the weekend with a fifth place result in Race 3.

The 27-year-old’s future beyond 2013 is currently unclear, with a continuation in V8 Supercars, a return to MotoGP or a complete sabbatical all appearing as options.

Following the strong showing in Ipswich that also saw Stoner top the opening practice session on Friday, Burgess warns that a move to the main championship is still some way off.

“I think guys like Chaz Mostert, Scott McLaughlin and Jonno Webb have shown the benefits of stints in the development category and I think another season there to perfect his craft would be more beneficial,” he told RBRA’s official website.

“All these guys came into the top category being familiar with the circuits and that’s a huge benefit.

“I think the importance of track knowledge was shown at QR with how confident and fast Casey was. We know he can drive.

“Learning how the car reacts, how the tyre reacts and all about the set-up, as well as learning the tracks, is what’s been difficult for Casey.

“He’s new to it all and while he’s done a great job in such a small amount of time, I think if he’s honest with himself he’ll say the same things.

“He can do it but I think he needs more time to get himself in tune with the car, the engineers and the circuits. But he’s capable and there is no doubt about that.”

Stoner moved from 24th to 16th in the series standings during the Ipswich weekend, despite maintaining his run of tangling with a rival competitor during the opening race of every event he has contested.

Burgess believes that some of the incidents Stoner has been involved in are the product of rivals being ‘star struck’.

“People need to get over the fact he is Casey Stoner and accept him as just another driver, a normal and easy going lad,” he said.

“That’s been a little bit of a downfall because people often look at the name on the side of the car and try something silly, so they need time to accept him and that he’s here to do a job.

The Dunlop Series will continue with the V8 Supercars Championship at Winton later this month.