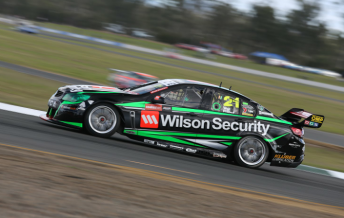 Pither at the wheel of the #21 Holden at Queensland Raceway

Brad Jones Racing has confirmed that Chris Pither will co-drive with David Wall in this year’s V8 Supercars endurance races.

Pither was part of BJR’s 2012 endurance line-up and rejoins the squad following the tragic death of the originally appointed driver, Allan Simonsen, at Le Mans in June.

The 26-year-old Pither is a regular in BJR’s Dunlop Series outfit and has steered Wall’s Wilson Security-backed Holden during the recent co-driver practice sessions at Townsville and Queensland Raceway.

“It’s great to be doing it for a second year back-to-back and gain some momentum. I’ll be a lot more confident going into this year,” said Pither, having helped Wall to a solid 14th place result at Bathurst last year.

“I’ve done the two co-driver sessions at Townsville and Queensland Raceway, which gives you a taste of the car.

“Although it wasn’t a whole lot of laps it was a great chance to get a taste of the Car of the Future. 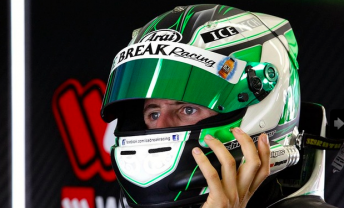 “The Car of the Future is a lot more like a race car to drive than the old V8s. They feel like they do everything a bit better with the main thing being the change of direction.

“They’re a lot more flowing so it’s more like a real race car would feel and braking is another main difference.”

Prior to 2012, Pither’s only Bathurst start had come in 2008, where he was involved in a heavy practice crash with Paul Weel.

Pither was scheduled to cut more laps in Wall’s car at a test day on Tuesday, but those plans have been postponed until later this month due to weather.

The drivers for Triple Eight’s Bathurst-only Wildcard entry are also yet to be revealed.

See below for the updated Pirtek Enduro Cup co-driver list