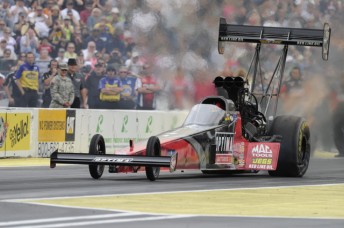 American-based Australian Top Fuel racer, Dave Grubnic made his first final of the 2013 Mello Yello NHRA Drag Racing Series in the O’Reilly Northwest Nationals in Seattle, going down to Morgan Lucas in the last round decider.

Grubnic – who last week was top qualifier – qualified second fastest then tore past Brandon Bernstein, Clay Millican and TJ Zizzo in his path to the final. Lucas won the holeshot and got by Grubnic by three-tenths of a second at the line.

Championship leader Shawn Langdon continued his relentless path to the Countdown by establishing the best reaction time of the weekend, top speed and fastest elapsed time.

Rapisarda Autosport’s Tommy Johnson Jr qualified in 10th placing before being taken out in the opening round by Millican.

Matt Hagan maintained his place at the top of the Funny Car points ladder through winning the Seattle event. He beat out Bob Tasca III in the finale to take out his 10th NHRA Mello Yello Series Funny Car career win.

His path to the decider saw him get around Todd Lesenko, Paul Lee – who upset John Force in round one – and Courtney Force in the semi-finals.

Tasca got past the Pedregon’s – Tony then Cruz –  and got through to the final when Tim Wilkerson red lighted in their semi.

Much speculation abounded over the weekend about the future of John Force and his stable in the NHRA Mello Yello Championship. The Ford Motor Company last week announced it would no longer support the veteran racer and his contract with long term supporter, Castrol is up for renewal. He didn’t rule out moving to the Top Fuel ranks.

Heading into this weekend, the NHRA reversed it’s controversial decision on Funny Car body tethers, which it had previously made mandatory across the field. The tethers are now optional, with the teams and the NHRA working on a suitable safety mechanism in the wake of Johnny Gray’s explosion last weekend.

The good form of Vincent Nobile continued in Seattle, taking his second consecutive Pro Stock event. He beat Jeg Coughlin in the final after earlier defeating Chris McGaha, Allen Johnson and Greg Anderson, the youngster placing himself well for the Countdown which draws ever closer.

Coughlin got through to the final past Steve Kent, Shane Gray and Mike Edwards.

The next round is in two weeks – August 15-18 – at Brainerd. There are just two rounds before the Series enters the final six Countdown playoffs.