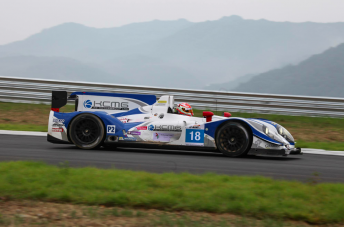 The Australian-based Brit, who only penned a deal with Hong Kong LMP2 team KCMG to compete in the newly formed series this week, had topped the times in practice but was pipped to the pole by OAK Racing’s F1 test driver Ho-Pin Tung by almost half a second.

Western Australian Steve Wyatt will start from fifth on the grid in the GTC AF Corse Ferrari 458 he is sharing with Michele Rugolo and Andrea Bertini. Just eight cars competed in the qualifying session.

A fire for Winslow’s KCMG car in the final practice session had halted the team’s progress and it was left to team mate Gary Thompson to qualify the car for Sunday’s three hour race.

The Irishman, who has been plying his trade in the FIA European Formula 3 and Japanese F3, provided LMP2 rivals OAK Racing with a tough challenge for pole but a new lap record for Tung was enough to secure pole. The former Renault F1 tester posted a 1m25.162s which was 0.466s quicker than Thompson.

Just on the heels of the Aston was Aussie GT specialist Wyatt in the AF Corse 458 who was a tenth further back.

The new four-race Asian Le Mans Series follows the format of the European Le Mans Series with teams competing in LMP2, LMPC, GTC and GT Am categories. LMP2 and GTC victors will receive entry to the 2014 Le Mans 24 Hours.