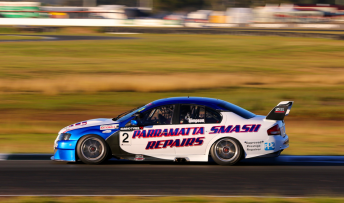 Ryan Simpson completed a dominant weekend in the Kumho V8 Touring Car Series by winning both Sunday races at Ipswich.

The former Formula Ford driver, who made his series debut in a Sonic Motor Racing Services-prepared ex-Triple Eight Ford last time out at Winton, eased away from second-placed Morgan Haber in each of the two races.

Haber took the flag second on both occasions but was later demoted to third, behind points leader Shae Davies, in the Race 2 result thanks to a five second penalty for a jump start.

A third in Race 3 cemented Davies a podium position, with the Fernandez Racing Ford driver now enjoying a healthy 82 point lead in the series over Terry Wyhoon after a fraught weekend for the veteran.

Starting at the back of the grid following a collision in Race 1, Wyhoon charged to eighth in Race 2, but could make up just two further places in the final.

Those ahead of him were Nathan Assaillit and Matthew Hansen, who secured fourth and fifth in the round respectively after scoring top six placings in each of the three races.

Less consistent was Matthew White, who ran as high as second in Sunday morning’s race before a engine gremlins, which had troubled the MW Motorsport Ford since the beginning of Friday practice, sent him to pitlane.

White subsequently pulled out of the final after again suffering the same fate on the warm-up lap.

Troubled weekends for Jim Pollicina and Tony Evangelou also continued on Sunday. Starting the day from the back following the Saturday incident with Wyhoon, Pollicina’s weekend ended in the sand after contact with Dan Day, while Evangelou was the last classified finisher after a clutch drama.

The weekend, however, was all about Simpson, who became the season’s fourth different winner in four rounds.

“We were disappointed with how things went at Winton, so we were keen to keep the speed we had there rolling into Queensland,” he said.

“It’s great to get the clean sweep, so we’d hope we can carry that to Phillip Island now and keep aiming for some more race wins.”

The Phillip Island event will take place on September 20-22.