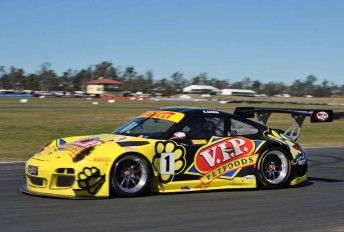 Klark Quinn added a second win to his Race 2 success

Klark Quinn swept by father and team-mate Tony with just two minutes remaining in the final race of the Australian GT Championship round at Queensland Raceway to score weekend honours.

The result ensures that the Porsche driver will take an unassailable lead into the final round of the championship at Highlands Park, New Zealand, in November.

Tony Quinn had appeared destined to take a dominant Race 3 victory before his Aston Martin Vantage became stuck in fourth gear during the closing stages.

Stopping the British sportscar on the circuit in order to reset the car’s onboard computer allowed Quinn to continue, eventually finishing third to Klark Quinn and Greg Murphy.

Murphy had made the best of the rolling start from the outside of the front-row, charging into the lead.

He would sit in that position for eight laps until the ageing Corvette proved unable to hold out the Aston any longer.

Continuing in second between the two Quinns, Murphy’s charge was always destined to be destroyed by the driver seeding parity that required the four-time Bathurst 1000 winner’s pitstop to be significantly longer than his two rivals.

Dropping almost 30 seconds in the stop, Murphy fell back to fourth, with a subsequent off while trying to round up the Rod Salmon/Liam Talbot Audi further hurting his chances.

Salmon sat third after the stops but eventually fell to fifth by the flag, behind the similar Audi R8 entry of Dean Koutsimidis/Tim Macrow.

The race was run in the absence of two of the weekend’s fastest cars, with Roger Lago’s Lamborghini withdrawing after gearbox problems in Race 1, and Maranello Motorsport’s John Bowe-driven Ferrari damaged in a brush with the pitwall during Race 2.