Hunter-Reay soars to pole at Mid-Ohio

Hunter-Reay soars to pole at Mid-Ohio 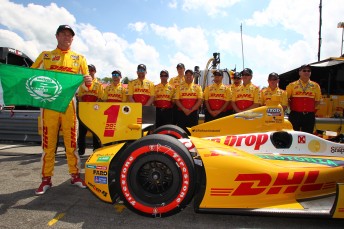 Hunter-Reay clocked 1:05.3519s to record his third prime starting berth for the year to revive hopes of hauling in the points leaders with six races left in the series.

Will Power will start from second ahead of Chip Ganassi’s Scott Dixon.

Power’s Australian compatriot James Davison has qualified 17th in his IndyCar Series debut in the Dale Coyne Honda, less than a second from the polesitter’s time.

Davison is only two positions back from the points leader Helio Castroneves who is currently 68 points ahead of Hunter-Reay.

“Last year we clawed back from bigger deficits,” Hunter-Reay said.

“Being late in the season, we need to go like we did last year at the end of the season, which is go for broke.

“We’re not interested in banking results right now and going for second or third in the championship because nobody really remembers who finishes second a couple of years from now.

“We’re going for it. Hopefully this is the first step in it. But we have a long way to go, including tomorrow’s fight for the win. It’s going to be a long, hard race going up against the Ganassi, Penske boys and my teammates as well.”

The Honda Indy 200 starts about approximately 5.30am tomorrow morning.