Ogier takes the lead in Finland

Ogier takes the lead in Finland 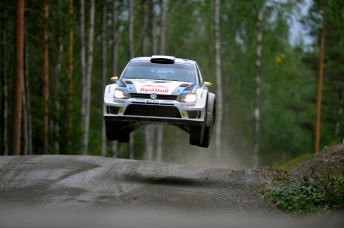 Sebastien Ogier jumped into the lead

Sebastien Ogier has overhauled Thierry Neuville to hold a 38-second lead heading into the final day of the Neste Oil Rally Finland.

The Volkswagen driver had a near perfect day on the stages in central Finland after starting the day five seconds behind the Belgian in a Ford Fiesta.

Things remained tight all morning, with Ogier trading stage wins with Citroen DS3 driver Mikko Hirvonen and Mads Ostberg in a Fiesta RS, so that just 11.4 seconds covered the top four at the midpoint service.

But it was all change in the afternoon, when Ogier upped his pace on the repeated runs winning all stages.

“I’m very pleased with the way that the car worked, how we were able to push, and also the way that I managed my pace. But it’s not over yet, there’s still a long day to come tomorrow.”

Overnight leader Neuville lost the position on today’s opener, but a puncture late in the day dropped him 30 seconds back.

“Without the puncture it was an okay day,” said Neuville.

“It was a shame, but okay that’s rallying. I don’t have that many but this time it’s happened.” 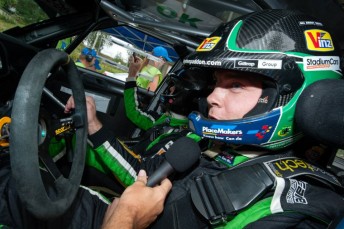 Hayden Paddon is third in WRC2

Ostberg is third, less than one second behind Neuville. The Norwegian was right with Ogier until SS15 – the day’s final forest stage – when he hit a rock, shattered his Fiesta’s front left wheel and dropped 45 seconds.

Hirvonen is fourth 1m04.4s off the lead, and the first to fall out of the victory battle. The Finn clipped a bank and had a massive spin on SS11, losing 20 seconds and damaging two tyres and his DS3’s rear suspension.

Evgeny Novikov is one driver lucky to still be in the event after crashing into a log pile midway through the day; he sits ninth. The Russian is not on the Christmas cared list of Kris Meeke who was held up for many kilometres directly behind.

Jari-Matti Latvala restarted today under Rally 2 rules after his leg one retirement, but with time penalties the Volkswagen driver is more than 20 minutes behind the leaders.

Czech Ford Fiesta RS driver Martin Prokop had been ninth until he retired after SS11 with an overheating engine and he was joined by Juho Hanninen after the Finn stopped with broken suspension after SS9.

In WRC 2 Jari Ketomaa has dominated winning eight of the day’s nine stages to increase his lead to 70.2sec in the new Ford Fiesta R5. Former F1 driver Robert Kubica lies second in a Citroen DS3 RRC with New Zealander Hayden Paddon completing the podium in a Skoda Fabia S2000.

“Straight away this morning we were able to climb to third and challenge Robert Kubica all day for second place,” said Paddon.

“On the first and last stage of each loop everything worked well. However the two middle stages which were a bit rougher which we struggled with – we’re not exactly why, but it will give me some homework after the event.”

Video wrap from the day