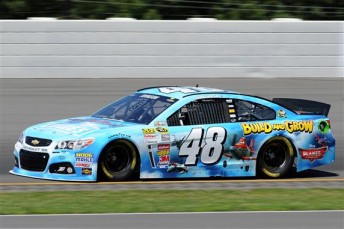 Jimmie Johnson fastest of all at Pocono qualifying

After dominating the previous visit to Pocono in June, Jimmie Johnson has once again put a line in the sand with a new track record in qualifying for the GoBowling.com 400.

The five-time NASCAR Sprint Cup champion, Johnson, has three wins at Pocono and today’s pole is the 31st of his career.

“The lap was awesome. I knew it was going to be fast,” said Johnson.

“We had a very fast racecar in the spring, so hopefully we can do it again.”

Johnson, who has four wins this season, led 128 of the 160 laps at the June race at Pocono and leads the standings by 75 points over Clint Bowyer.

Just outside the record breakers was Australia’s Marcos Ambrose who will start from eighth.

“I felt like I left it all out there,” said Ambrose.

“We were going for the top spot all the way, but we’ll still take an eighth-place starting spot with our Stanley Ford. Aric was fast too, so we feel good about getting both RPM cars in the top-10. We’ll focus on the race now.”