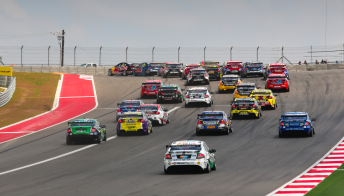 The V8 Supercars field heads through Turn 1 at the COTA

V8 Supercars is awaiting a firm date commitment from the Circuit of the Americas ahead of its planned return to Austin, Texas, in 2014.

Although announced as a five-year deal, the future of the Austin 400 is not completely guaranteed with the circuit said to have made a significant loss on May’s inaugural meeting.

Complicating the matter, the COTA recently confirmed that it will host the X-Games extreme sports festival from May 15-18 next year, taking the date previously used by V8 Supercars.

During this year’s event, circuit president Steve Sexton had stated a preference for seeing the V8 Supercars retain a May slot, citing minimal competition in the local sports marketplace during the month.

While the COTA did not respond to Speedcafe.com’s enquiries this week, V8 Supercars chief executive James Warburton remains optimistic that the event will return without a significant change to its timing.

“We are finalising a date with them (Texas),” he said.

“We noticed that X-Games date so we have to talk to them about that date. It can’t be too far away from where it was this year.”

Warburton confirmed that the previously touted ‘twinning’ of the Austin event with a second in North America will not take place next year.

The large grid size and requirement for air freight ensures that the V8 Supercars Championship is considerably more expensive to export than categories such as the sea-freighted World Touring Car Championship.

No V8 Supercars event outside of Australasia to date has run the full course of its contract, leaving Warburton to pour cold water on future international expansion plans immediately upon taking up the role of CEO in July.

Despite recent confirmation of that the Townsville and Gold Coast street races will continue, the complete 2014 V8 Supercars calendar remains some way off.

“We’ve got some time frames in terms of drafts. We have to have some discussions with the teams owners,” Warburton said.

“We’ve obviously got to work around our overseas travel in particular.

“But we’ve got logistics and we have to work with the network and map between their commitments.”

Along with Austin, the future of the Sydney 500 remains the biggest question mark.

“I’m hopeful that we will have an outcome in the short term,” said Warburton of the event, which is now in its fifth year.

“I’d like it to be next week. But these things take a bit longer. We’ve made a very strong case.

“I believe we’ve got a strong level of support from the NSW government.”

While Warburton confirmed there will be no new or additional events in 2014, he promises a degree of innovation.

“There will be some innovation around some of the formats and twilights and that will all become evident subject to the team owners wanting to pursue some of the innovation.”