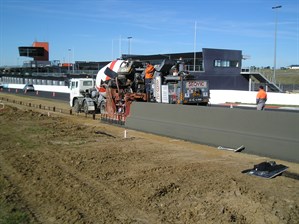 More safety measures will be completed well ahead of the Supercheap Auto Bathurst 1000.

A new concrete barrier which has replaced the guardrail fence that has been in place for almost 30 years is in the final stages of being finished.

The barrier will be accompanied by debris fencing with the much needed changes boosting safety along the pit straight. The barrier has also been pushed out by a couple of metres which will increase room in the Harris Park spectator area.

“Its a fantastic step forward in patron safety and an initiative which the Bathurst Regional Council should be proud of. Once more this sensational track has stepped up to the mark.” Bruce Keys, CAMS Track Safety Manager, said.

The improvements have been funded by the Federal Government under the Regional Development Australia Fund and come after a complete redesign of the earth-filled tyre barrier near the Armor All Bridge at the exit of The Chase was finished earlier this year.

“Not only will the fans be able to see more of the track but they will be able to be very comfortable in the knowledge that there are better protected,” Keys said.
Keys has played down some concerns of diminished visibility for spectators with the addition of the debris fence.

The entire 6.213km mountain track will be resurfaced with work scheduled to start the day after the Bathurst 1000 on October 13.

Mount Panorama this year celebrates its 75th year as a motor racing venue with the first car race staged – the Australian Grand Prix in Easter 1938 won by Englishman Peter Whitehead in his ERA.