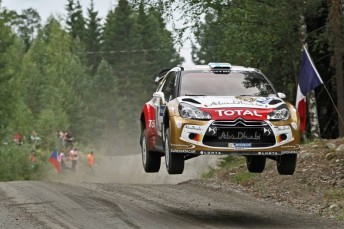 Citroën’s Mikko Hirvonen will start last amongst the priority seeded drivers in the opening leg of Rally Finland.

Hirvonen set the fastest time in the qualifying stage and had the first option on the start position and he choose 14th. This will mean he will have not only the swept line on the road, he will also have the luxury of knowing split times while in the stages.

One thing that could work against the Finn during the 48.24km opening leg is the weather, as any rain would benefit the early runners.

“We don’t know how much it will rain tomorrow,” he said.

“If it rains then start position will be important, but if it doesn’t then it won’t be as important. I don’t think it’s so crucial to win qualifying in this rally but it’s still nice to be fastest.”

Championship leader Sebastien Ogier was second fastest and opted for the next lowest start position.

“I was happy that Mikko was faster because I could see what position he chose,” said the Volkswagen driver.

“It gives me an idea of Citroën’s weather forecast!”

In fact the entire order from qualifying is reversed for the opening leg, with no driver choosing to take the gamble on the weather and start further up.

VIDEO highlights from the start and qualifying