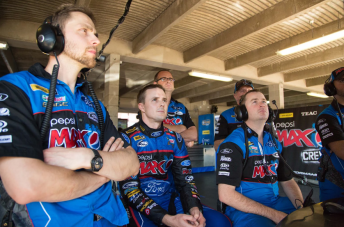 Ford Performance Racing’s engineering department is set to suffer a major blow with the impending exit of its manager Mathew ‘Techo’ Nilsson.

Nilsson joined the factory Ford team at the end of the 2010 season and has been a driving force behind turning the squad into a consistent contender.

He is expected to return to his former home at the Holden Racing Team following his departure from FPR.

Nilsson was absent from the recent Coates Hire Ipswich 360 having been reduced to a workshop-based role after tendering his resignation. How long he will stay in that position is currently unclear.

When appraoched by Speedcafe.com, FPR co-owner Rod Nash denied talk that Nilsson has already left, but confirmed that he is currently in a changed position.

“He’s just going to change roles,” Nash told Speedcafe.com. “There’s some talks going on but nothing has been finalised.” 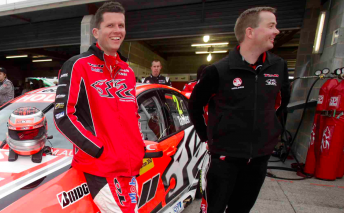 Nilsson, pictured here with Garth Tander in 2009, is tipped to be rejoining the Holden Racing Team

Nilsson has become one of the most respected members of the V8 Supercars paddock since joining the category full-time in 2002 as a data engineer with 00 Motorsport.

The Victorian began an eight-year tenure with Walkinshaw Racing the following season, working as Rick Kelly’s race engineer under the K-Mart Racing banner in 2003 and 2004.

Nilsson continued with the squad in 2005 when it was rebranded as the HSV Dealer Team, spending three seasons alongside Garth Tander that culminated in the 2007 championship title.

Crossing over to the HRT side of the Clayton factory in 2008, Nilsson remained with Tander for a further two years before an internal reshuffle saw him move onto Will Davison’s car for what proved to be a disastrous 2010 campaign.

Holding degrees in both mechancial engineering and business adminisration from the RMIT University in Melbourne, Nilsson has been the engineering manager at FPR since his arrival.