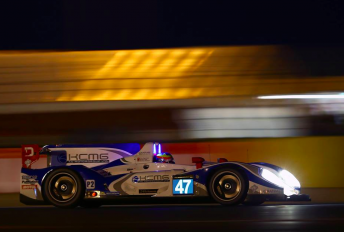 KCMG competed at the Le Mans 24 Hours earlier this year

A move to the LMP2 category in the Asian Le Mans Series represents a chance for the former Indy Lights and Asian F3 champion Englishman to secure a coveted seat at 2014 Le Mans 24 Hours.

“I was at the Le Mans 24 hour this year and was very impressed to see them (KCMG) leading the race in only their first year as an LMP2 team.

“I first met team owner Paul Ip and members of his KCMG team back in 2006 when I raced in Formula 3 and I’m very proud to be joining these guys again.”

The new four race series will follow the format of the European Le Mans Series with teams competing in LMP2, LMPC, GTC and GT Am categories. LMP2 and GTC victors will receive entry to the 2014 Le Mans 24 Hours.

Since securing his second F3 title in Australia, the has been plying is trade in the Australian GT Championship driving the Skwirk Audi R8 with Rod Salmon among development work with Radical Sportscars.

AGTC squad Erebus Motorsport is being tipped to join the series later in the year with its pairs of Mercedes-Benz SLS AMG GT3s.