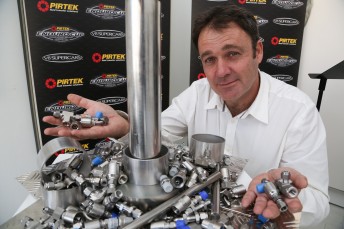 Pirtek has been announced as the major sponsor of V8 Supercars’ new-for-2013 Enduro Cup rewarding the highest points scorers over the Sandown, Bathurst and Gold Coast races.

The four-year deal will include the creation of a unique perpetual trophy designed and created by Australian artist James Corbett.

The Endurance Cup concept was announced by V8 Supercars earlier this year as part of the move away from an international co-driver format for the Gold Coast race.

“The iconic Sandown 500 and Supercheap Auto Bathurst 1000 have been amongst the most prestigious sporting events in Australia for 50 years,” said V8 Supercars chief executive James Warburton.

“With its wonderful heritage in motorsport, it’s fantastic to be able to announce that Pirtek will assume the naming rights for the Pirtek Enduro Cup.”

Its history in V8 Supercars includes backing of Stone Brothers Racing’s championship winning assaults with Marcos Ambrose in 2003 and 2004.

Pirtek boss Stephen Dutton says he believes that the support of the Pirtek Enduro Cup is a natural extension of his company’s commitment to Australian motorsport.

“The V8 Supercars endurance races represent quality, durability, preparation and teamwork from each of the 28 cars that begin all three of these events and that’s exactly what Pirtek is all about,” he said.

“The endurance races at Sandown, Bathurst and the Gold Coast transcend sport in Australia and are renowned around the world as some of the most hard fought sporting contests that motorsport delivers.”

The trophy itself brings a degree of innovative to the Enduro Cup with Corbett commissioned to fashion a piece from a raw pile of materials.

Corbett has gained an impressive reputation crafting life-like pieces from old car parts that alone are just bits of flotsam and jetsam but when finished are unique and artistic masterpieces.

“The majority of my pieces are made from old car parts and some of those have been up to 80 years old,” said Corbett.

“When Pirtek approached me about this project I thought it would be a terrific challenge and something different that I could really enjoy.

“Pirtek have given me a pile of their fittings to work with and it is my job to create an iconic Australian sporting trophy, which will also be appreciated as a piece of art – it certainly won’t be something you can buy off the shelf.”