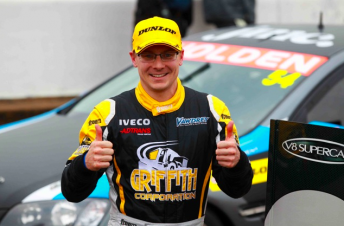 Jack Perkins believes that finding the budget to compete in the next round of the Dunlop Series at Winton would provide a major boost to his chances in October’s Bathurst 1000, where he’ll team with Scott McLaughlin.

Since making his return to the Dunlop Series at Barbagallo in May, Perkins has been operating on a round-by-round basis with Holden outfit Eggleston Motorsport.

His deal to compete at Queensland Raceway, where he ended up winning Race 3 and the round, was only completed the day before opening practice.

Perkins must make the next round at Winton in just over two weeks in order to be eligible for the Bathurst round of the Dunlop Series under rules that prevent drivers from racing on the Mountain without supporting the remainder of the series.

“The cheque book bounced after the first round (Barbagallo) and I’ve just been scraping through since then,” Perkins told Speedcafe.com. “On Thursday morning before Ipswich I didn’t actually think I’d be racing because we were still working on sponsorship.

“Hopefully now we can build on the victory and make sure we get to Winton because I need to do that round to be eligible for Bathurst.

“Doing the Dunlop Series round at Bathurst will help my efforts in the 1000 with Scotty enormously, so I’ll be working pretty hard to get to Winton.”

Perkins enjoyed his first drive of McLaughlin’s Fujitsu GRM Holden in the co-driver practice at Queensland Raceway on Friday and is expecting to be a major threat for the endurance races.

“It’s a tough one when the first time you get to drive it is at the race meeting, because you get the co-driver special in terms of tyres,” he said, admitting also that his previous work on V8 Supercars’ Car of the Future prototype program made it easier to settle into the new car.

“But it was good to work with the guys and see that we were right in the mix pace-wise in terms of co-drivers.

“It’s just a great environment down there (GRM) at the moment because the team is producing great equipment and Scotty has certainly made the most of it.

“I think anything is possible when it comes to the enduros. I’m not one to talk up my own stocks, but I think it’s fair to say that we’re in with as good a chance as anyone.”

Perkins believes that the success of McLaughlin this year, as well as last Sunday’s effort from fellow Dunlop Series graduate Chaz Mostert, has underscored the strength of the second-tier class.

“I don’t think there are too many guys that could actually walk straight from the main series to the Dunlop Series and win first-up at the moment. That’s how competitive it is,” he said.

“It’s become a lot more like the Nationwide Series in America where it’s a very competitive series in its own right.”

Although the short race durations seen in the Dunlop Series came in for heavy criticism at the weekend, Perkins isn’t being drawn into the debate.

“It’s up to the category,” he said of the formats.

“I’ve been telling them that reverse grid races are a joke for 10 years yet they’ve still got one.

“I’m sick of fighting stuff like that. I sound like my old man but that’s why he doesn’t come racing any more, because he’s over it.

“It’s a similar thing for me. I’ll just go racing with whatever they tell us to do and give my opinion if they ask for it.”

Perkins will be back at Queensland Raceway this weekend co-driving Mark Griffith’s Ginetta G50 GT4 in Round 5 of the Australian GT Championship.