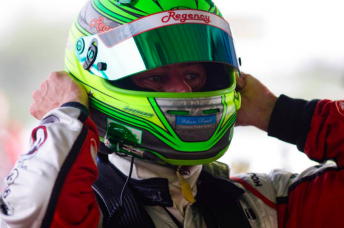 The freshly renewed contract for James Courtney to spend a second term at the Holden Racing Team leaves him open to pursue one-off drives in signature overseas races.

As with his previous deal at the HRT, Courtney is free to sign up for international drives in non-conflicting events with V8 Supercars.

Courtney’s manager Alan Gow finalised another three-year term with the Holden factory squad in preference for other options which included stepping into the German DTM Championship.

“There are still key events that I want to do. Daytona, Le Mans and that sort of stuff,” Courtney told Speedcafe.com

Courtney’s career was fashioned overseas, first landing on the radar with two world karting titles before Gow paved the way for him to enter British Formula Ford, which he won in 2000.

Although firmly entrenched on the Gold Coast with wife Carys, daughter Zara and son Cadel, Courtney nor his family were not opposed to relocating overseas if the HRT renewal was not forthcoming.

In 2005 during Courtney’s second year driving for Toyota in the Super GT series in Japan, he was living on the Sunshine Coast and commuting to every round.

For his second stint at HRT, Courtney said the first choice was to remain with the Clayton operation and remain at his Gold Coast home rather than shift to another V8 Supercar camp. He had been loosely linked with a move to Erebus.

“I’ve set goals to achieve here. It would have killed me had I have gone to another team and these guys (HRT) started getting the results next year,” he said.

Courtney’s initial three-year tenure at the HRT which started in 2011, a year after taking DJR to a memorable title, co-incided with a period where the team have struggled for consistently competitive results.

After winning in Abu Dhabi for the first time out in HRT colours in the second race at the Yas Marina circuit, times have been lean for the one-time Jaguar F1 test driver.

There were similar parallels to be drawn with Courtney’s introduction in V8 Supercars when he took the seat of NASCAR-bound Marcos Ambrose for the first of a three-year stint at SBR from 2006.

“The biggest thing coming in originally (in V8 Supercars full-time) with SBR was learning the cars,” Courtney said.

“People were saying a ‘European hero is coming back and doing nothing’ as opposed to ‘now you are with the big teams and you’ve just won the Championship (2010 at DJR) and the results aren’t there.

“Its the same but very, very different.

“I think those times in my career have probably helped me get through this period. I’m not going to lie and say its been easy.

“It’s been a tough time for everyone in the team with the way its been going.”

“The biggest problem now is that the engine is letting us down quite a bit. We’ve made a big jump forward with the chassis stuff.