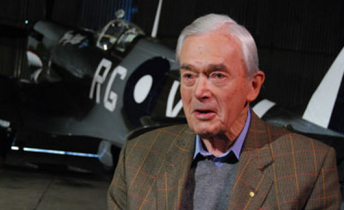 A remarkable chapter in Australia’s wartime and motor racing history has closed with the death of Tony Gaze.

The gentlemanly Gaze enjoyed a long life enriched with achievements as a pioneering racer, and no-less a brave fighter pilot during WWII.

During the war at the controls of a Spitfire, Gaze won the Distinguished Flying Cross three times and was credited with 12.5 aerial combat victories.

Although he did not enjoy the horrors of war. Even in the heat of combat he had shown tremendous compassion for the enemy.

In an interview in 2009 when he was a guest along with his late wife Diana at the Clipsal 500 V8 Supercars meeting, Gaze retold a story of one of his 485 sorties over Europe and how he became concerned over the fate of a German pilot he had shot down.

Showing a deep sense of remorse Gaze said: He (the German pilot) was so brave that he sat in the cockpit until he was forced to bail out, and there were four holes in his parachute. I had climbed to 2000 feet and gave the fixes [position] so the rescue people could come and get him, because I thought he was a bloody brave man and he deserved rescuing.

“The Germans then sent so many people to look for him and I thought, ‘My god, I’ve shot down an ace.’ I found out from history that they didn’t find him and I was pretty sorry because he was a tough bloke.”

Those words, which still resonated with Gaze so many years later, summed up the fabric of a person who has achieved so much in his life yet somehow he flew under the radar, rarely publicly credited or recognised for his remarkable accomplishments.

Perhaps what Gaze is not as well known for is the influence he had on British motor racing in the immediate years after WWII finished in 1945.

Gaze came to influence the Duke of Richmond in 1948 by suggesting that Goodwood, which had been in use as an airfield during the war, would be a prime location for a motor racing circuit.

The occasion arose where he summoned his good mate Richard ‘Dickie’ Stoop to join him for a blast in a couple of sports cars around Goodwood.

“He (Stoop) and I both had MGs, and we looked at it and I said, ‘Let’s have a race.’ We had some Irish folk running for their lives but we decided that it was good (as far as racetracks go),” he recalled during a time he was stationed at nearby West Hamlet. 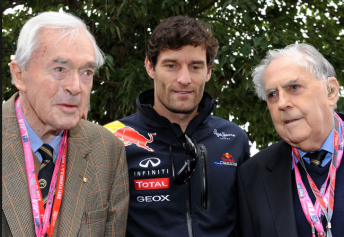 “Then after the war I was in the office with the Duke of Richmond, and someone said he’d just been made president of the junior car club and that they were looking everywhere for a circuit to replace Brooklands.

“So I said, ‘Don’t be silly, he owns one [Goodwood],’ and they said, ‘Well, go and tell him.’ Anyway, the Duke of Richmond had a look, drove a tractor around Goodwood, called in experts, and lo and behold a track started.”

Back in Australia, racing at the Mount Panorama circuit resumed following the war interruption with Alf Najar winning the first post-war race at the circuit in 1946.

The Bathurst circuit then hosted its second Australian Grand Prix in 1947 and a year later the circuit came to the attention of Gaze.

He entered two cars for the Bathurst races: a supercharged Alta in the 25-lap NSW Hundred race, and an HRG Aerodynamic, capable of running close to 170 km/h down Conrod Straight.

Gaze would go on to marry Lex Davison’s (lost his life racing at Sandown in 1965) widow Diana (who died in August, 2012) and thus became step-grandfather to current V8 Supercar drivers Will and Alex Davison.

Prior to the war Gaze had been taken by car racing although he did not pursue it seriously until after peace was declared at the end of 1945.

“I first raced before the war while I was in England, at a place near Cambridge,” Gaze told Speedcafe.com during a 2010 interview.

“I joined a local club and did some hill climbs. I stayed in the RAF after the war and ended up doing some more hill climbs; there was no organised racing at the time, so we just did what we could.”

He has the distinction of being the first Australian to drive in a World Championship Grand Prix; his first race was in the Belgium Grand Prix in 1952.

Although not having a long association in grand prix racing, Gaze was then directed toward a group which was famously called ‘The Kangaroo Stable’ through the 1950’s which involved a group of Australian drivers racing abroad.

The stable ran several Aston Martin DB3S machines in Europe, before the sports-car season was ravished with the calamity that occurred at Le Mans in 1955.

During his motor racing heyday, Gaze, like many of his contemporaries competed for the love of the sport. Although he reflected with some sadness that the great Italian driver Alberto Ascari had lost his life without a penny to his name.

“It was more fun, I suspect, than motor racing is now, because there was no money in it,” Gaze said.

“We were all mates, us drivers. There was no real money because all we were allowed to put on the car was the manufacturer’s name. People like Alberto Ascari (the Italian who won World F1 Championships for Ferrari in 1952 and 1953) died poor.”

Ascari was at the peak of his powers when he perished during private practice at Monza on 26 May 1955.

The ’50s was a perilous era in motor racing, when lives were lost and were expected to be lost.

Gaze had become accustomed to death and mayhem through his service during the war.

He would talk of these times with some trepidation.

“‘[In the war] there were blokes getting killed all around you. You didn’t use the word “death”; you said the other fellow had ‘joined’.”

A true gentleman, a true hero, remembered fondly and will never be forgotten.