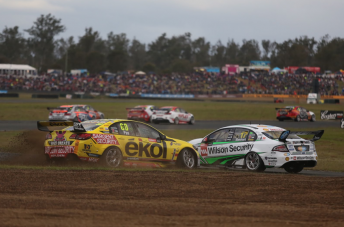 Pye was involved in a first corner Race 24 incident, and later lost further time with this off at Turn 3

Pye has been relieved of 25 points after admitting to careless driving in a first corner Race 24 clash that saw an attempted inside passing move on Alexandre Premat end in disaster.

The two Holdens made contact, sending the Frenchman into the path of an innocent Russell Ingall.

Ingall was forced into retirement due to the resulting damage, while Premat pitted before reemerging for 26th.

Pye finished 19th and remains 26th in the points standings after the penalty.

In the Dunlop Series, Ford drivers Nick McBride, Michael Hector and Taz Douglas all copped the wrath of the stewards for incidents in Sunday morning’s second race of the weekend.

McBride lost 25 points after a tap on Rodney Jane that sent both Falcons into the gravel at Turn 2.

Lesser 15 point reprimands were given to Hector for his hit on Garry Jacobson at Turn 5, and to Douglas for his hip-and-shoulder on Andrew Jones at Turn 3.

Incidents between Jim Pollicina and Nick McBride at Turn 3 and Ash Walsh and Taz Douglas at Turn 2 in the final race will be reviewed prior to the next event at Winton.

The Dunlop Series is being led by MW Motorsport’s Dale Wood after Queensland Raceway, while Jamie Whincup remains in command of the V8 Supercars Championship.

See below for the updated Dunlop Series points standings