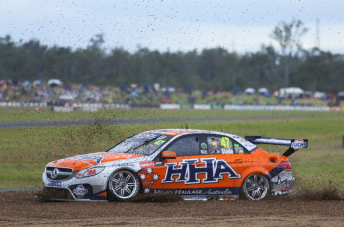 Tim Slade was left disappointed yet encouraged after throwing away what promised to be Erebus Motorsport’s maiden V8 Supercars podium on Sunday at Ipswich.

Having qualified a season best fourth, Slade was running second to eventual winner Chaz Mostert when he went off at Turn 3 on the third lap.

Falling as far back as 18th, a combination of impressive pace and the misfortune of others allow Slade to climb back through to eighth by the flag.

Although cautious on making predictions on what might have been, a podium, if not a win, had clearly gone begging.

“I was just trying to get the brake bias right and it was still a bit damp, but there were no real excuses,” Slade told Speedcafe.com of his early off.

“I just hit the brake pedal a little bit too hard and potentially a bit too late for the conditions, locked a wheel and speared off.

“I’m not one to play the woulda, shoulda, coulda, but you can look at our pace relative to our guys up the front and it may have been a podium. That was really pleasing, but at the same time I’m kicking myself for making the mistake.”

“The way we were getting the speed out of the car in qualifying didn’t really work when we were following people in the race,” he said.

“That hurt us and we really had to have a think about it. We improved it a little bit on Sunday morning, but then just decided to have a really big swing at it for the last race and it was good.

“That race was probably the most enjoyment we’ve had from the driver’s seat so far this year because the car was good and reasonably hooked up.”

With increased engine temperatures in traffic still robbing the AMG engines of some power, Slade is hoping that a repeat of Sunday’s cool conditions at the upcoming Winton event will help the team towards another front-running performance.

Although encouraged by his recent qualifying speed, the 27-year-old is at a loss to explain the recent dominance he has displayed over his two team-mates.

Slade’s average qualifying result over the Darwin, Townsville and Ipswich weekends of 9.4 is almost half that achieved by Lee Holdsworth (18.3) and Maro Engel (18.5).

“I really don’t know,” he said of the discrepancy.

“Since we’ve sorted out some issues that were effecting me and our car in the first few races of the year we’ve just sort of clicked and been able to get reasonable speed out of it in qualifying.”

Slade and his team-mates were back at Queensland Raceway on Monday to complete a ride-day alongside Nissan Motorsport.