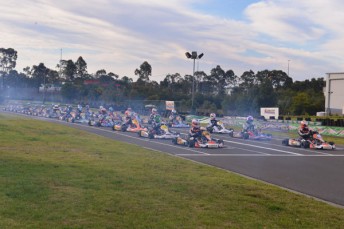 Dutchman Joey Hanssen has edged closer to championship glory in the 2013 Castrol EDGE CIK Stars of Karting Series with victory during at the penultimate round in Sydney.

The 2011 World Cup Champion was masterful in the pair of Pro Gearbox (KZ2) finals. He completed a momentous day for the Shamick Racing team with his double victories, chalking up six for the season. He now holds a 69 point lead at the top of the standings with one round remaining.

Adding further to the Shamick celebration was the performance of Jordan Ford, who had his season best finish of second.

Hanssen’s closest Championship combatant coming into the weekend, Chris Hays befell trouble, scoring a DNF in the opening final before starting at the very rear and scything his way forward to finish fourth.

“Friday it was a difficult day for me. I blew up an engine, we swapped engines to a brand new Modena engine with the help of Mattia Madami and Darren King of CRG Australia,” said Hanssen.

“I’m very thankful for Shamick Racing team, this circuit is very hard on the go-kart and the tyres. My kart was one of the better ones this weekend I believe and my team-mate Jordie Ford came second which is great for the team.

In the Pro Junior (KFJ) ranks, William Hawkes started the second 25-lap final from sixth placing and quickly made his way forward and into the lead. A strong battle between Championship leader Liam McLellan and Callum Walker ensued behind with local Andrew Kahl keeping that pair honest.

Once Hawkes got his Shamick Racing Arrow to the front, he was quickly able to build an advantage and hold onto it to the finish crossing the line 1.2 seconds in front of McLellan.

McLellan mitigated a qualifying problem on Saturday through solid heat racing which saw him start second on the grid for the first final. The first final was won by James Abela, who continued the trend of season 2013 of no round clean sweeps in Pro Junior by finishing fifth in final two. In Pro Light (KF), Pierce Lehane dominated on-track proceedings to cross the line first in both finals – however losing water from his radiator during the second final left him underweight when meeting the weigh scales, forcing officials to disqualify him from final two.

This handed the win to Sydney local, Dimitri Agathos. Fittingly, Agathos – who is representing the Kosmic factory in the European KF Championships – was awarded the perpetual Franco Guaitoli Memorial Shield, given out at the New South Wales round of the Championship each year.

Topp was the best of the Championship front-runners, with Matthew Waters (second coming into the round) beating home leader George Geranis who encountered problems in Saturday’s heats. The pair finished fourth and fifth respectively.

The final round of the championship will be contested at Melbourne’s Todd Road facility on September 21/22.