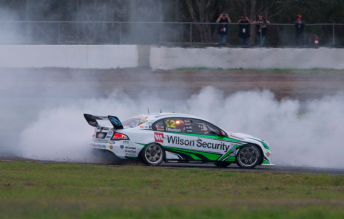 Dick Johnson was left proud, humbled and utterly exhausted after an emotional week culminated in a stunning return to victory for his famous V8 Supercars team.

The victory marked a miraculous return from DJR’s latest financial struggles that saw it on the brink of missing the grid this season.

Although the team has been returned to a position of relative financial strength since February, a series of extracts published in the last seven days from an upcoming Johnson autobiography have seen Johnson’s struggles thrust back into the spotlight. 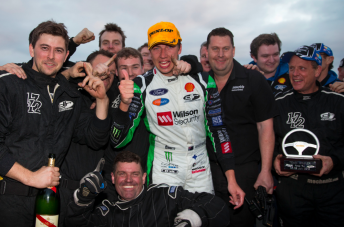 The book has revealed that the five-time ATCC winner lost in excess of $9 million in a failed attempt to start up telecommunications and home loan businesses in order to help fund DJR following the collapse of former sponsor Westpoint in late 2005.

The intervening seven years have seen the team lurch from one crisis to another, through which it has continued to survive on the good will of various business partners, the loyal support of its fan base and sheer determination on behalf of Johnson.

In the face of the recent media coverage, Johnson says Sunday’s race victory is a clear sign that his team is on the way back.

“It’s important because it shows how far we’ve come,” he told Speedcafe.com of the victory.

“The team is fine at the moment (financially). We’re pretty much secured for this year and it’s just a matter of focussing on what we can put together for next year to build on what we’ve done.

“Winning is obviously an important part of that building process.”

The latest airing of the at-times heartbreaking Johnson story, which included the legend having to sell his collection of famous race cars in 2007, has prompted what Johnson describes as a humbling public showing of support.

“The number of people that have wanted to contribute to our team is quite amazing really,” he said of his interaction with fans over the Coates Hire Ipswich 360 weekend.

“It makes you feel embarrassed in one sense and pretty humble in another, to have people come up to you and offer you money or say that they’d love to do it (contribute) if they could.

“That’s the nature of our team, and we never forget the people that put us where we are.

“A lot of the credit goes to the guys in the team that never give up either. It’s a family environment and we treat them all like family.”

Johnson was also keen to heap praise on the Ford Performance Racing-contracted Mostert, who the team is unsurprisingly keen to hold onto for 2014.

“He’s only had a few races with us, but the guy is bloody good,” said Johnson.

“It’s not any one thing that wins these races it’s a combination of everything.

“Chaz did a great of qualifying and (you can see that) even for (Jamie) Whincup and (Craig) Lowndes, if they start back in the pack there they’re going to be pushing shit up hill.

“It was just a matter of all the ingredients coming together on the day.”

Johnson will this week begin a sales tour for his new book, which is said to already have needed multiple reprints based on pre-order sales.