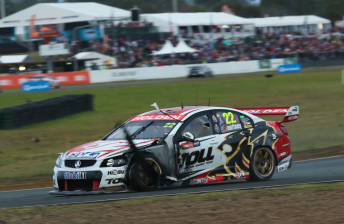 James Courtney was among several to suffer a spectacular tyre failure

V8 Supercars’ Dunlop control tyres have been thrown into the spotlight following a spate of punctures in Race 24 at Ipswich.

High drama unfolded during the weekend finale as left-front tyre failures sent a significant portion of the field to pitlane.

Championship leader Jamie Whincup was the first to fall victim and eventually suffered a second failure.

Although debris on the circuit in the final race could have contributed to the situation, several teams had reported tyre damage following Saturday’s twin 60km races, which ended with a single failure for FPR’s David Reynolds.

With a Safety Car having provided respite for the rubber during the first 100km race on Sunday, the weekend finale proved the longest sustained period of green flag running across the weekend.

Dunlop’s motorsport operations manager Kevin Fitzsimons told Speedcafe.com on Sunday evening at Ipswich that the cause of the problems were unclear.

“We’re still looking into it,” he said

“A couple of them have got puncture holes in the centre of the tread section, but why we’re not currently sure.”

This season, the first on an 18-inch tyre under the Car of the Future regulations, has seen failures at a variety of circuits, causing some concern ahead for the likes of high-load circuits Phillip Island and Bathurst.

“(Ahead of the final race) we made some set-up changes to the front to try and get a bit more front (grip), so it could have been those, I’m definitely not ruling myself out as the culprit,” he told Speedcafe.com.

“It could have been the track because on Saturday’s two race stints we saw cuts to the tyre that weren’t blunt cuts as sort of an impact from a normal kerb or something. They were sharp, deep cuts all the way through chords. They were tyres that if you had kept them running would have had a catastrophic failure.

“We’ll try and analyse the best we can. Obviously with the first one the evidence is in pieces so we’ve got to see if there’s anything left to see and then make a judgement.”

Tyre pressure sensors are not permitted in V8 Supercars on cost grounds, meaning that teams have no way of warning their drivers if a failure is imminent.