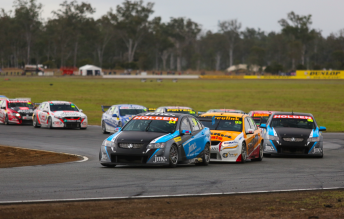 Jack Perkins controlled two restarts on his way to victory

Jack Perkins took the spoils in a wet and wild finish to Round 4 of the Dunlop Series at Queensland Raceway.

Showers prior to the start made for an incident-packed race that saw just four of the originally scheduled 14 laps run under green flag conditions.

Pre-race rain had seen teams forced to make a tyre choice gamble while on the grid, with the majority electing for wets.

Starting from second on the grid, Perkins fell to fourth as he ducked to the inside off the start.

Choosing the outside line through Turn 1 provided more grip, however, and helped the Eggleston Motorsport Holden driver to recover to second.

A subsequent dive up the inside of a slick-shod pole-man Dale Wood at Turn 2 then yielded the lead.

From there, Perkins let the drama unfold behind him, controlling two Safety Car restarts – including one with just a single lap remaining – to take the race and round victories.

Steve Owen was almost two seconds adrift at the flag in second, with the two-time series winner narrowly out-dragging a determined Daniel Gaunt on the run to the flag.

Andrew Jones recovered from his Race 2 dramas to take fourth ahead of Casey Stoner, who gained 11 places in the limited laps available. Both Holdens had run the slick tyres and would have been in the box seat had the race run its full distance.

Paul Morris took the flag sixth but was subsequently handed a 27 second post-race penalty for mid-race contact with Wood, dropping the PMM Holden to 26th in the final result.

Wood finished seventh despite the Lap 7 drop-punt at Turn 3 that rotated the MW Motorsport Ford. Race 2 winner Andre Heimgartner was also collected in the incident and wound up 22nd.

Wood’s title rival Ash Walsh too found trouble, clashing with Taz Doulas through the high-speed Turn 2 after spending the early laps struggling on his slicks. Both Fords were pitched into the gravel after the hit, with Douglas’ entry making the fence.

Wood continues to lead the series over Walsh, with the margin now 128 points.

See below for the full Round 4 result