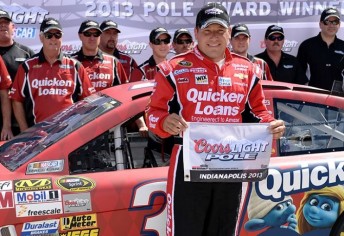 Ryan Newman might not have a drive for 2014 but a pole position for this weekend’s Samuel Deeds 400 at Indianapolis will do his prospects no harm.

Newman was the final qualifier around the ‘Brickyard’ knocking series points leader Jimmie Johnson off the top spot.

The Stewart-Haas driver turned a track-record lap of 187.531 mph to claim his first Coors Light Pole Award of the season and the 50th of his career.

Newman was the fastest of nine drivers to break the previous Indy track record, with Australia’s Marcos Ambrose the next best in 10th.

“We improved a lot and I am pretty happy with that lap,” said Ambrose.

“We were much better in qualifying trim than what we were in practice yesterday. I feel good about that.”

Mike Bliss and Scott Speed failed to qualify for the 43-car field.