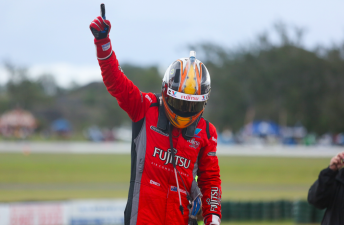 Scott McLaughlin has scored the second victory of his rookie V8 Supercars Championship season with a controlled performance in Race 23 at Ipswich.

The Fujitsu GRM Holden driver, who shadowed Jamie Whincup to the line in Race 22 on Saturday, proved more than a match for the four-time champion over the 100km journey.

Beating Whincup off the line, McLaughlin showed the way for all 32 laps to lead home his Red Bull Holden rival by 0.7s.

The race was run in dry conditions, with threatening skies failing to deliver. A mid-race Safety Car for debris also failed to change proceedings at the front.

The most intense moment came on the opening lap when Chaz Mostert shot from fourth on the grid to challenge Whincup around the outside of Turns 1, 2 and 3.

Mostert soon fell to seventh by running wide at the Turn 3 hairpin. He recovered to be as high as fifth, only to be pipped by a fast-finishing Jason Bright at the chequered flag.

Further up the road, James Courtney celebrated his new Holden Racing Team contract with third, one place ahead of Fabian Coulthard.

Tim Slade’s Erebus Mercedes ran in the top 10 during the early stages before eventually falling to 13th.

Fortunes were again far worse for team-mate Lee Holdsworth, who chalked up a fifth consecutive failure to finish after coming off worst in a three-car squeeze with Scott Pye and Shane van Gisbegen moments prior to the Safety Car.

Van Gisbergen, who had struggled in the early stages, took the opportunity to take a new set of tyres under the full course caution. He eventually recovered to 17th.

Nissan’s tough weekend continued as all four of its cars came home line astern outside the top 20.

A final 100km race will complete the Coates Hire Ipswich 360 later this afternoon.

See below for the full Race 23 result