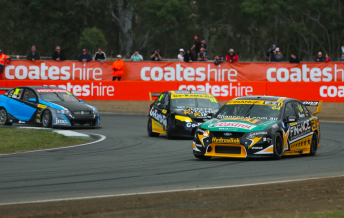 The race was called when it reached its time cut-off just eight laps into its scheduled 14 lap duration.

The start had earlier been delayed due to a passing shower ahead of the warm-up lap.

The rain was brief enough to ensure that the field eventually took the start on slicks.

Drew Russell beat pole-man Heimgartner off the line, but found himself demoted to second when the Finance Ezi Ford slipped by on the second lap.

Russell pressured Heimgartner to the flag, with the eventual margin between the two Fords just 0.7s.

Points leader and Race 1 winner Wood survived minor scrapes with both Morris and Perkins mid-race before settling into his eventual finishing position.

Casey Stoner scored his best race result to date thanks to a steady drive from 17th to 11th.

Another on the charge was Kristian Lindbom, who turned a 29th place start into an 18th. The Evans Motorsport Ford had failed to finish Race 1 after an opening lap dust-up triggered by a tap from Stoner.

Those in the wars in Race 2 included Andrew Jones and Taz Douglas, who clashed at Turn 4 on the opening lap while disputing third. The contact sent both cars to pitlane with damage.

The two Sonic Motor Racing Services Fords were both punted out of contention in separate incidents.

Gary Jacobson was tagged into a spin by Michael Hector after running wide and rejoining the racing line betweens Turn 4 and 5, while Rodney Jane was later the victim of contact from Nick McBride.

The combined points score from Races 1 and 2 will see Wood and Perkins share the front-row for the afternoon’s final race.