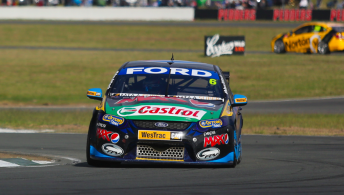 Having qualified an outstanding fourth for Race 23 just moments earlier, Mostert shot to the top of the order with three of the 15 minutes remaining.

A subsequent mistake from Jason Bright at Turn 3 that saw the Team BOC Holden stranded in the gravel momentarily appeared to have assured Mostert pole.

Davison was already on his way to completing what would be the session’s best lap, however, running a 1:09.06s to edge his fellow Ford Performance Racing contracted driver by 0.05s.

Davison’s effort, which netted his first pole of the season, was marginally underneath the qualifying record that Whincup had set in the Race 23 session.

David Reynolds completed a Ford sweep in third ahead of Tim Slade, who recorded the best qualifying result yet for the Erebus Mercedes effort.

Fifth for Alex Davison and eight for Mark Winterbottom made it five FPR-contracted drivers in the top eight.

Maro Engel also made an early final dash, after which he fell from ninth to 20th.

See below for the Race 24 qualifying result