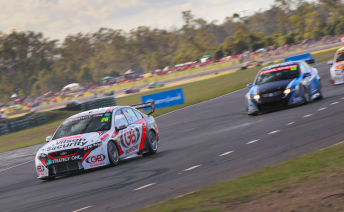 Wood was chased all the way to the flag by Perkins

Dale Wood extended his lead in the Dunlop Series by holding out a determined Jack Perkins in Race 1 of the weekend at Queensland Raceway.

The MW Motorsport Ford driver made the most of his career first pole position, beating fellow front-row starter Perkins to the first corner.

Perkins kept Wood in his sights for the entire 14 lap journey, setting the fastest lap of the race in the closing stages before crossing the line just 0.4s adrift.

Steve Owen, Ashley Walsh, Daniel Gaunt and Taz Douglas completed the top six after a stagnant race at the front.

Andrew Jones charged through from 15th on the grid to finish seventh ahead of Nick McBride, Drew Russell and Andre Heimgartner.

Falling to 29th, Stoner recovered to 17th by the flag, lapping within 0.1s of Perkins’ fastest time in the process.

Another in trouble early was series contender Kristian Lindbom, who found himself nudged wide by Stoner at the first corner.

Morgan Haber and Josh Hunter were also on the retirements list after a multi-car incident at the end of the opening lap.

The collision was triggered when Hunter spun Gary Jacobson at Turn 6, resulting in a concertina that also involved George Miedecke and a luckless Haber.

Miedecke and Jacobson escaped the drama to finish 14th and 19th respectively. The latter was one place ahead of his team-mate Rodney Jane, who had been spun out of 13th place by Cameron Waters in the early stages.

Race 2 for the Dunlop Series will take place on Sunday morning and feature a reverse top 10 grid.