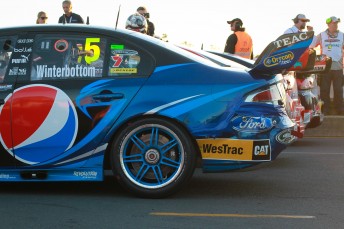 Ford factory driver Mark Winterbottom fired a barb at Craig Lowndes after an incident on the opening lap of the 60/60 Super Sprint at Queensland Raceway.

Winterbottom dropped from third to sixth at Turn 3 after an apparent bump from Lowndes knocked the Pepsi Max Ford into Fabian Coulthard’s path.

The incident, which saw Coulthard shuffled outside the top 10, is being investigated by stewards post-race.

Winterbottom managed to recover to third by the end of the 120kms, moving to within 21 points of his third placed team-mate Will Davison in the process.

“He (Lowndes) obviously dived up the inside and (I) was just smacked in the rear,” Winterbottom commented when asked his opinion of the incident.

“It’s interesting when you talk to someone who always accuses someone of diving at their team.

“He obviously blames Fabian (Coulthard) straight away. So no surprise there to be honest.

“I had good aero after the first one when the rear end was crumpled in,” he continued.

“We made changes between the break and the car was pretty quick.”

Lowndes, however, claimed he had not touched his rival.

“I had a good run on the inside of the Fabian Coulthard into turn three and I pulled it up,” he said.

“My impression is that Coulthard overshot it and he had the contact with Frosty. There’s not a mark on my car. I didn’t feel anything.”

Amid the acrimony Winterbottom has given himself a critical self-appraisal pinpointing his weaknesses.

“I’m weak in one spot and I’ve got to fix Turn 5 pretty quickly,” Winterbottom said.

“I didn’t really maximise the second set of tyres today (in qualifying). But one tenth covers 10 cars so if you get it right you get pole and you get it wrong and you’re 10th.”