Whincup bounces back with Race 22 pole

Whincup bounces back with Race 22 pole 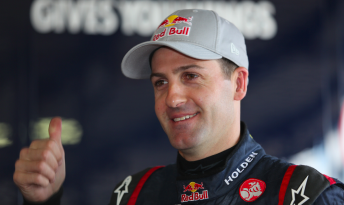 Jamie Whincup secured his ninth pole of the season

Jamie Whincup has rebounded from his horror qualifying results in Townsville to score pole for the opening race of the 2013 Coates Hire Ipswich 360.

The Red Bull Racing Australia driver scored his ninth pole of the season in one of the tightest qualifying sessions on record.

Typically, Whincup scored the maximum result with the minimum of fuss, completing a conservative banker lap early before sitting in the pits waiting to undertake a final single-lap run.

Jason Bright sat second ahead of the final green tyre runs but fell to 11th by the flag, albeit just 0.2s shy of Whincup’s pole time.

Just 0.8s separated the entire 28 car field, which was rounded out by the Nissan of Michael Caruso.

Fellow Altima driver Todd Kelly had been as high as fourth after an early final green tyre lap and will start from 14th.

Race 22 will take place over two 60km legs this afternoon.