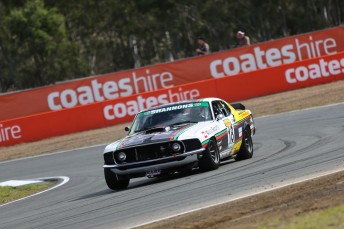 Ace driver John Bowe extended his lead in the Touring Car Masters with victory in the first of three races at Queensland Raceway.

Bowe (Ford Mustang) managed to get the jump on polesitter Keith Kassulke at the start and headed the field heading into turn one.

Kassulke, buoyed by his maiden pole position at his home circuit, pushed Bowe all the way and never let the Mustang out of his sight.

Despite coming under heavy pressure from Kassulke’s Ford XB Coupe, Bowe had the measure of his rival and secured a comfortable victory.

Andrew Miedecke drove a clean race to third but the big story was a struggling Jim Richards, who came home in eighth.

Richards has now conceded yet more points to title rival Bowe and he will be keen to claw his way back in the final two races.

In the Aussie Cars, Trent Young gave his title hopes a much needed boost as he claimed victory in both races today.

Young jumped polesitter Nathan Townsend at the start of race one as the huge 39 car field headed into turn one.

The safety car interrupted proceedings on lap three but Young made no mistake on the restart and led home Townsend and Darren Chamberlin to the chequered flag.

He continued to show his class at the Ipswich venue in race two after fending off Darren Chamberlin and Maurice Masini to take his second win of the season. The race proved to be eventful from start to finish.

Young, Townsend and Chamberlin were involved in a titanic scrap for the lead in the early stages before it was neutralised by the safety car.

Further resulting accidents at the same corner brought out the safety car.

Once racing continued Young calmly led Chamberlin and Masini to the flag.

With championship leader Adam Gowans absent from the meeting, the double victory for Young and the podiums for Townsend, Chamberlin and Masini has tightened the battle in the title race.

The son of V8 Supercars team owner Brad Jones led from the start and held his nerve despite a brief safety car period to take the chequered flag from Anton De Pasquale and Liam Sager.

Lloyd touched wheels with Ash Quiddington resulting in a brief airborne moment for Lloyd before he clattered into Campbell at the final corner.

Jones made no mistakes at the restart and he edged away lap by lap from De Pasquale.

Sager and Simon Hodge enjoyed a close fight for the final podium position, which was eventually claimed by Sager.