James Courtney set to remain at the HRT

James Courtney set to remain at the HRT 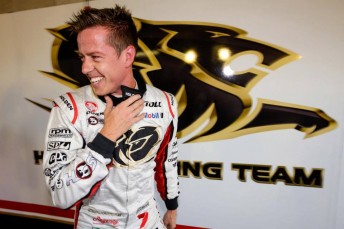 Although several options, including a move overseas, have been mooted, it is now almost certain that Courtney will stay at HRT for a fourth season.

Currently the highest paid driver in the field on a reported $1.3 million per season, the new deal is expected to include a reduced salary.

“It (negotiating Courtney’s contract) is what I’m really here to do.

“I think people are waiting for what he does more than normal.

“There’s always been a few possibilities both in Australia and overseas and they are the sort of things we have to weigh up.

“Overseas is still on the radar but he’s settled back here. Racing overseas doesn’t scare him. He’s been doing that since was 16 years of age, but it’s different now he’s got a family.

“The preferred option is to stay here and that’s the way we are heading.”

Gow added that his mission was to have closed any new contract by the end of the weekend.

The Holden Racing Team’s Steve Hallam declined to comment when approached by Speedcafe.com over Courtney’s future.

Courtney joined the HRT as the reigning V8 Supercars champion in 2011 after two years at Dick Johnson Racing.