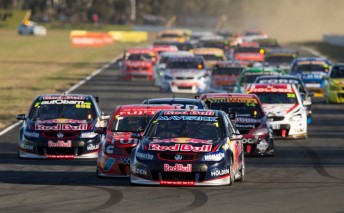 The field heads into Turn 3 on the opening lap

Craig Lowndes is set to receive a two-place grid penalty for Race 23 following the incident involving Mark Winterbottom and Fabian Coulthard on the opening lap of Saturday’s Super Sprint at Queensland Raceway.

Lowndes appeared to make contact with Winterbottom at the right-hand hairpin, nudging the Pepsi Max Ford wide and into the path of Coulthard.

Winterbottom dropped to sixth in the incident before going on to finish one place ahead of Lowndes in third, while Coulthard dropped to a low of 16th before finishing 11th.

Lowndes had denied hitting Winterbottom post-race, while the Ford driver was left unamused.

According to Lowndes, a two-place grid penalty has been recommended to the stewards by the V8 Supercars Championship’s Driving Standards Observer Cameron McConville.

Final sign-off on the penalty is expected to take place in the morning, along with confirmation of punishment for Todd Kelly, who made contact with David Wall and Chaz Mostert in separate incidents during the second leg.