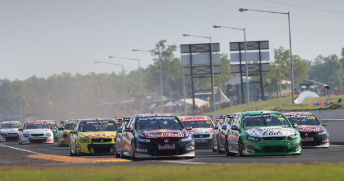 The Super Sprint restart in Darwin

Drivers remain split over the merits of the 60/60 Super Sprint format that has caused its share of chaos since being introduced this season.

Holden Racing Team driver James Courtney spoke out against the format on SpeedcafeTV earlier this week, stating that the 60/60 makes Saturdays “really, really grubby and messy”.

The criticism followed a particularly incident-packed third running of the format at Hidden Valley last month.

The double-file restart procedure remains one of the most contentious issues, particularly for those such as Erebus Motosport’s Maro Engel that have experienced the process from back in the pack.

“The restart procedure isn’t great,” said the German, who set the fourth fastest time in practice on Friday.

“I’ve been down the back and its hard to judge when the leader goes.

“In my opinion there should be a flag like there is in any other category. Basically you are trying second guess when the leader is going. There has been contact in the past.”

David Reynolds, who crossed the line first in the opening half of the last Super Sprint race at Darwin in June before his race was ruined in the second half, is a surprising supporter of the Super Sprint.

“I support the concept. But I think for the first part of the 60 there should be some small reward for a race,” Reynolds said.

“We do a race and then basically start again. It’s a bit silly because you get nothing. I ‘won’ a race in Darwin (and) we need some sort of reward system.”

Erebus driver Lee Holdsworth is a fan but warns there could be a lot of drama firing into the fast Turn 1 right-hander at Queensland Raceway.

“I think at most tracks its been pretty exciting and good for the fans. I think this track there could be a bit of mayhem at turn one,” Holdsworth said.

“You get caught on that outside line and its just so slippery. With the soft tyres running there will be marbles off line. Whatever works for the crowd I’m happy with it.”

“I prefer the pit stop races to get the whole team involved and the strategy side of things,” he said.