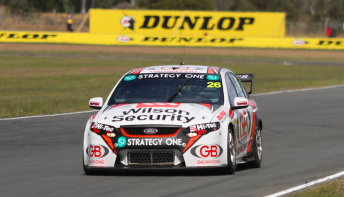 Dunlop Series leader Dale Wood will start the opening race of Round 4 at Queensland Raceway from pole position after edging out Jack Perkins in qualifying.

Perkins’ Eggleston Motorsport team-mate Daniel Gaunt set the pace for much of the 30 minute session, but was bumped to sixth after failing to improve in the late flurry.

Wood improved from second to first by setting what would prove to be the eventual pole time of 1:10.04s with just three minutes remaining.

Having been forced to abandon an earlier lap due to traffic, Perkins’ best proved just 0.02s shy of Wood, ensuring Holden’s leading light in the series a second front-row start in as many events.

Steve Owen, who had recorded pole at Barbagallo and Townsville, could manage just third this time and will share the second row with Ashley Walsh.

A single second covered the top 22 cars at the end of the 30 minutes, halving the margin from the corresponding session in 2012.