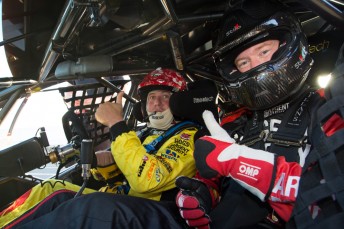 Three-times world speedway champion Jason Crump was chauffered around Queensland Raceway in a Dunlop Series V8 but the retired rider revealed he has no intentions of following in the footsteps of fellow two wheel legend Casey Stoner.

The 37-year-old Speedway legend, who retired last year, joined up with close friend Paul Morris for a ride in his Dunlop Series Holden around the 3.12km Queensland Raceway.

Crump admitted he throughly enjoyed the experience but says he has no plans of making the series his next career step.

Two-time MotoGP champion Stoner has switched from two wheels to four this year in the Dunlop Series this year with Tripe Eight and enjoyed his best day to date today as he topped the timesheets in morning practice.

Crump told Speedcafe.com: “I’ve known Paul for many years and its always good to see what my mates are up to. I’ve been out in a few cars and it was good to see how a professional drivers drives these cars. It was really cool. The braking is pretty awesome. It’s completely different to speedway as there are corners going both ways.

“I’m a motor bike rider who is retired. I’m looking for something to do but thinking about racing a V8 Supercar is a little bit out of the question.”

Meanwhile, Crump is confident Queenslander Darcy Ward will be more than able to fill in for the injured Australian Poole Pirates captain Chris Holder in the British Elite League.

Holder broke his hip in a Elite League meeting earlier this month, which could rule him out for some time.

He added: “Chris has been unlucky with this injury he has picked up and I think this is going to keep him out for a while. Darcy has got all the talent in the world and he is coming back from an injury he just need everything to come together on the right day and I’m sure he can be up there.”