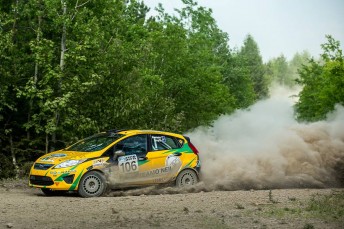 Reeves keen to post his third-straight win in the US

Australia’s Brendan Reeves will be out to continue his hot streak in the Rally America series this weekend in the New England Forest Rally as he aims for a three-peat of class wins at the event in Maine.

Along with co-driving sister Rhianon Smyth, Reeves has set the US scene alight as he has not won the two-wheel-drive category in both Oregon and Pennsylvania, he has also pressed the front-running all-wheel-drive turbo o entries; all on events he has never competed at before.

Reeves has competed with support from Team O’Neil and Ford, plus a wide range of individual bonnet sponsors.

“I’m really looking forward to getting behind the wheel of the Team O’Neil Ford Fiesta R2 again,” Reeves said.

“Once again this is a brand new event for us, but the car we’re driving is really well sorted, and I’m confident of being able to reduce the gap to the leader in the two-wheel drive category.”

After missing the opening two events of the season, Reeves trails Andrew Comrie-Picard, but victory in New England is sure to set a tight finish to the series over the following two events.

Although the events are all new, he will have familiar competition with fellow Australian Will Orders back to defend his class victory on the event.

“Of course it would be great to beat Will on this event because we’ve had some great battles in Australia in the past, but in reality he’s not a title contender, so we just need to make sure we stay ahead of all the Rally America series regulars,” said Reeves.

“The Fiesta is a reliable and well-sorted package, and with my experience driving a similar car in the World Rally Championship in 2011 and 2012, I’m confident that we can get the job done.

“This event only allows for one pass of reconnaissance before the rally (on Thursday), but Rhianon and I have got a great system of making pacenotes now, and that shouldn’t cause a problem.”

The Team O’Neil Ford Fiesta R2 will have a new gearbox fitted for the event, and the team have also made some changes to the braking efficiency of the car. With some parts support from Ford America, everything is in place.

Based at Newry, in Maine, north of Boston, the New England Forest Rally will be run on gravel over 13 special stages, with a competitive distance of 193 kilometres.