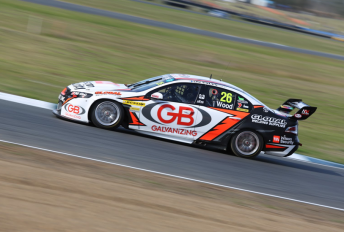 MW Motorsport team-mates Dale Wood and Steve Owen returned to the top of the time sheets ahead of qualifying for the Dunlop Series at Queensland Raceway.

Following Casey Stoner’s chart-topping morning effort of 1:11.09s, Wood moved the benchmark to a 1:10.56s in the second 40 minute hit-out.

Wood set his fastest time on his 17th and final lap before spending the dying minutes in pitlane.

Stoner lapped marginally faster in the second session that he had while topping the charts in Practice 1, later declaring his day highly enjoyable.

“It’s a pleasant feeling to come to a track we actually know and we really enjoyed it out there,” Stoner said.

“We’re improving with every race and at a track we’ve spent a lot of time at I think we’re in a position to hopefully show our true pace.

“The car felt good. I know a lot of the guys around me threw on some new tyres at the end but we didn’t have that option and stayed on used tyres.

“But we’ll all get new sets of greens for qualifying and racing and hopefully we can keep it up.”

The Dunlop Series will return to the circuit tomorrow morning for qualifying ahead of Race 1 in the afternoon.