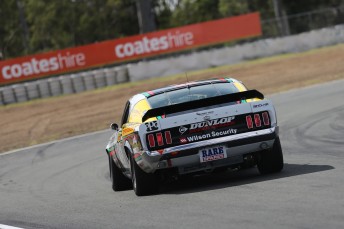 Championship leader John Bowe looks set to dominate round four of the Touring Car Masters at Queensland Raceway after topping both of today’s practice sessions.

Bowe, driving a Ford Mustang, had no problems getting up to speed around the 3.12km Ipswich circuit, setting the overall fastest lap of 1:18.4306s in opening practice.

Both sessions proved to be closely fought with Bowe a mere two tenths quicker than the Holden Torana of James Gomersall in P1 and Les Walmsley’s Holden HQ Monaro in P2.

Only a second covered the top eight in an which should indicate that this weekend’s races will be hotly contested.

The Queenslander set his personal best in the dying minutes of the session eclipsing New South Wales‘ Trent Young, who had been in charge for the majority of the 20 minute stint.

Macauley Jones was the class of the field in the Australian Formula Ford Championship as he set the fastest time overall from today’s two free practice sessions.

The son of V8 Supercar team owner Brad Jones set a time of 1:04.3250s in free practice one which was less than a tenth of a second quicker than the Spectrum of South Australian Sam Power.

Queensland’s Liam Sager was third fastest just a tenth further back with only 1.6s covering the 14-car field.

Free Practice two saw fractionally slower times produced and it was Power who topped the timesheets.

Jones was four hundredths slower ahead of Sager in third once again.