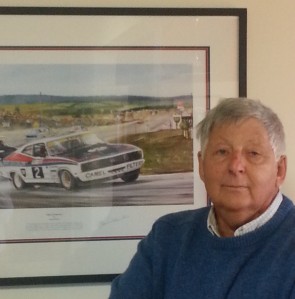 Speedcafe.com continues its feature on Alan Hamilton picking on the time he took a Porsche to run at Le Mans in 1981 with Peter Brock, Jim Richards and Colin Bond.

However the all-Australian entry did not make it to the starting line for the famous 24 Hour race won that year by Jacky Ickx and Derek Bell.

Continue reading our in-depth interview with Hamilton who successfully mixed his primary business as a Porsche dealer with racing.

SPEEDCAFE: Tell us about your 1981 Le Mans entry

Hamilton: The car we took there to race was a Porsche 924 GT-R. We took a team with Peter Brock, Jim Richards and Colin Bond and it was a factory race car built for us to race at Le Mans. Tragically we had trouble in practice. The car was totally prepared out of Weissach (Porsche Competition Department) ready to race and painted up in green and gold. It was named Spirit of Australia, which was long before Qantas used the terminology.

About a month before the event the factory asked if they could pinch the gearbox out of our car to take as a spare part to another race meeting. New production gearboxes would be available shortly. So we said, ‘fine, that’s good and our car got a new Getrag gearbox for Le Mans’. Unfortunately they made a very small error in the tolerances of the gearbox and when the engine and gearbox heated up, it seized up the gearshift mechanism.

Brocky went out in the car first and got half way around his first lap and couldn’t change gears any more. Bondy went out and had a quick run but we finished up second reserve for the starting line and we didn’t get to start in the event itself which was tragic and I disappeared back to the Porsche factory feeling very grumpy.
I have to say the factory treated us very well and that was the car that was subsequently converted for Bondy to run in the GT Championship the following year with a quad cam Le Mans engine in it.

SPEEDCAFE: 1984 will be remembered as the year the World Endurance Championship came to Australia to race at Sandown Park. What was your involvement with this event?

Hamilton: We had a massive involvement. We turned over our entire Noble Park facilities (adjacent to Sandown) to many of the teams who operated out of warehousing there. The Italians particularly took over our kitchen at the place and the first thing they unpacked was their pasta and cooking facilities. The Germans arrived with their factory teams and starched uniforms and looked highly professional, whereas the Italian cars were sitting huddled in the corner, dripping oil from the last race they had been at which was in Japan.

But all the Italian boys were out in the kitchen preparing spaghetti for everybody. But it was a spectacular event for us and we had a very big involvement with the circuit itself, we had marquees filled with Porsche guests from around Australia and it was very spectacular.

To get the WEC cars to the circuit they simply drove them down Princes Highway to the circuit. The Police arrived about 30 minutes later wondering what on earth had happened (laughs), the cars just started up and drove out of workshops and off the to track. It was very spectacular. 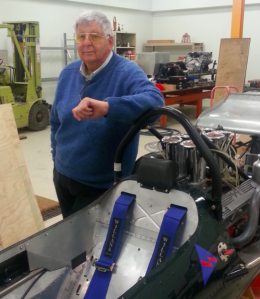 SPEEDCAFE: If money was no object, what is the one racecar you would love to have in your collection?

Hamilton: It probably isn’t a race car. It’s a car that was called the Porsche 944 Cup car and they were only ever produced in left-hand-drive. So I asked my friends at the factory if I could have one and that it would have to be right-hand-drive. So they built one for me and it is the only one of its type in the world.

Andrew Miedecke ran it a couple of times in Targa Tasmania and a private collector currently owns it. I’ve already approached him about buying it back again. I guess it has those enthusiastic things about it for me that it was a one-off car, built specially by the factory for me personally and I don’t know why I sold it all those years ago.

SPEEDCAFE: Do you regret having to retire from driving when you were still so competitive in 1978 or did you feel after the Sandown crash, it was time to stop?

Hamilton: I didn’t actually retire and went on to win another national championship, the Australian Hill Climb Championship in a car we built ourselves. Prior to that Sandown meeting I was thinking of giving away that competitive type of motor racing, as I simply couldn’t devote the time to it that it needed.

The Sandown accident confirmed that I wasn’t going to do that. The crash left me an insulin dependent diabetic and CAMS weren’t keen on handing out competition licenses to insulin dependent diabetics, but they did grant me a licence to compete in hill climbs, which I did for a little while longer. I also had a few runs in Porsche Cup events which were very enjoyable.

SPEEDCAFE: Once the Porsche was ineligible, did you ever have any desire to continue racing touring cars?

Hamilton: No not at all. Touring car racing is not one of my enthusiastic followings. I don’t think you can successfully modify a touring car for racing as they are built for an entirely different purpose and I preferred to race a car that was built especially for motor racing. If I look at V8 Supercars today, yes, they are built specifically to go racing but they don’t pay any homage to being a touring car. They’re a space frame chassis with regulated parts all the way through them and I guess for some portions of the crowd they are a spectacular thing to watch. But I find it difficult to spend an hour in front of the TV watching that sort of rubbish. 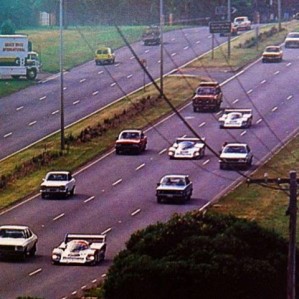 SPEEDCAFE: As a former open-wheel star, are you saddened by the lack of interest people have for them now in Australia?

Hamilton: I am not sure there is such a lack of interest. I think there is still a very big F1 following but in terms of competitive motorsport in Australia, yes I am mortified that V8 Supercars have virtually squashed all other areas of motorsport and to a large extent I also hold CAMS responsible for some of that. I’ve heard it referred to as ‘the Conspiracy Against Motorsport’ and I think that’s a valid point sometimes.

SPEEDCAFE: A lot of your career was spent in Formula 5000’s. They were awesome to watch but what were they like to drive?

Hamilton: To drive them was very exciting. They were also fairly dangerous. What a lot of people don’t realise is that from 1969 to about 1980 or ’81, they were actually faster than F1 cars. My first F5000 was a McLaren M10B, which was a fantastically well-built car and a super car.

The Lola’s after that tended to be modified F2 chassis’ and the jokes went around that if you crashed one you’d end up with the Lola limp and a there are quite a few of us in Australia with them.

My second F5000 was a Lola and I did get a fairly big limp after I crashed it at Sandown. But they were a fantastic car to drive and I still love them and am looking forward to getting back into the seat of mine sometime this year or next.

SPEEDCAFE: The historic scene is massive in the US, Europe and the UK and growing in Australia. What is your involvement in the historic racing scene?

Hamilton: I think it’s growing here because of the frustration people feel about trying to go motor racing in any other category. At least in historic racing you get to have a drive every now and then there’s a minimum of fuss about doing it provided your car is eligible to compete. I think this has spawned the growth of historic racing in many countries because the cost of going motor racing now is so very, very expensive. 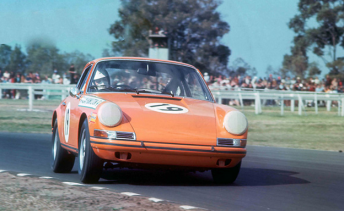 Alan Hamilton in his famous Porsche at Warwick Farm

SPEEDCAFE: As the Porsche importer and Victorian dealer you would have some fairly famous names come in to buy a car over the 40 years?

Hamilton: I think one of the best things about the business, apart from the staff we attracted was the customers we attracted. After I was bought out by Porsche from the business in 1992 that was the one thing I really missed most of all.

We had Lord and Lady Casey, Melbourne Lord Mayor Irvin Rockman but many other real characters that weren’t so much the rich and famous but people who just loved the product and loved the marque.

I remember Tom and Joyce Horsefield who was a soil agronomist with in those days the CRB, (Country Roads Board) and Tom had lost a leg at some stage.

He used to take a day off from work so he could stand by his car while it got serviced. It wasn’t to check up on whether the boys were doing a good job but just because he wanted to see what they did to his car.We had so many like that.

Ron Angus in South Australia the great grandson of George Fife Angus, who was sent out by Queen Victoria to establish the South Australian colony and it was really quite extraordinary. I am sure Porsche do have a lot of characters still, but now they are more the people who have made a lot of money on the stock market or whatever. But that side of the business was really fantastic and entertaining and very valuable for us.

There were many great friendships created as well as many great friendships with people at the factory. I was very privileged to become a personal friend of Professor Bott, who was the head of R&D and on several occasions stayed at his family home and was also given entree to secrets that were happening at Weissach, both on the military side and the engine development for Harley Davidson long before it became known that Porsche were building an engine for them.

SPEEDCAFE: In addition to historic racing, what are you up to these days?

Hamilton: My wife and I bought a vineyard and winery down on the Mornington Peninsula after nobody wanted to proceed with our property at Tallarook which we originally bought and called Porsche Park, where we were going to have a motor racing circuit and a hill climb track there, but with the takeover of my company by Porsche back in 1992, that whole project collapsed and Porsche then went on to do something similar with an operation at Mt Cotton in Queensland.

I think they would have been better going ahead with Tallarook, nevertheless that’s ancient history.

My son asked ‘what are you staying up at Tallarook for, why don’t you buy something down on the Peninsula, where you have a good choice of restaurants, the climate’s better and the grass is greener’? So we finished up buying the vineyard and winery on 70 acres and we run it and we will retire here full time in the next 12 months.