Taylor determined to shine in Romania

Taylor determined to shine in Romania 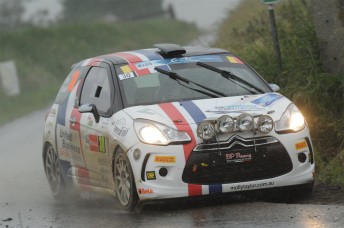 Molly Taylor in the rain at the Ypres Rally

Molly Taylor believes she is due for a change in fortunes on the next event of the European Rally Championship this weekend at the Sibiu Rally in Romania.

The Australian, who had a second place finish in the 2WD category at the Tour de Corse, then failed to finish the next event at the Ypres in Belgium.

The up and down nature of the championship means that Taylor and her United Business-backed Citroen could be straight back in the title chase with a victory in the mixed-surface event.

Although Taylor has not competed on the event before, and the team will not conduct a pre-event test, she is determined to show her potential and that of her DS3 R3 on the Romanian roads.

“I hope that in Sibiu luck will be on my side … it would be high time to reward all the work done in the last months, I hope so both for me and for the team,” said Taylor.

“We did not need the off in Ypres Rally, our Citroen DS3 R3 had no problems, the tyres were right, unfortunately we paid dearly a small mistake in difficult road conditions, but this will not be an obstacle to our desire to do a good event in Romania.

“I do not know Sibiu Rally at all, but I am told that it is a very tough race for both car and crew, obviously knowing nothing of the roads which we will drive on we will certainly be at a disadvantage compared to local drivers or to those who have already tackled this rally.

“For this race United Business has not scheduled pre-event tests, the race is new to me, I will have to commit myself to the utmost to get straightaway the right confidence with my DS3 R3”.

Sibiu Rally will run on Friday and Saturday with crews facing 14 stages for a total of 228 competitive kilometres.